The PM 38 Club is for all those Boats (and their Owners), which were built using the Free Boat Plans that were published in magazines such as Popular Mechanics, Popular Science and the Boat Builder Handbook.

By the end of the nineteenth, beginning of the twentieth century long before the advent of television and before the internet was even thought of, news was principally promulgated via newspapers. 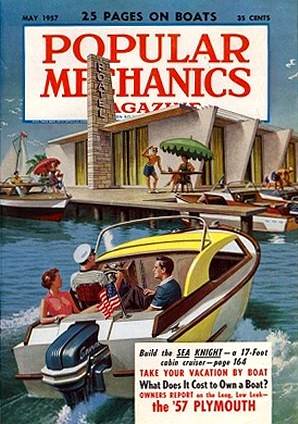 Most newspapers however still only catered to local audiences.


An increase in printing and distribution efficiency as well as a growing demand for more national information led to the emergence of mass appeal magazines, particularly those which catered to the readers increased leisure time.


And publishers who were able to capture and keep the public's interest also gained from increased advertising revenue.


Two of America's most popular magazines, both of which are still being published today were Popular Science founded in 1872 and Popular Mechanics first published in 1902. 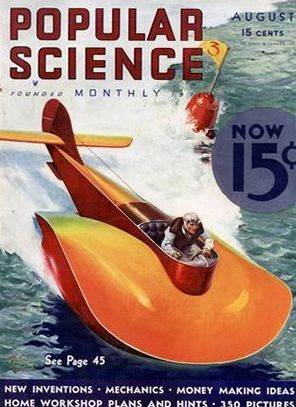 Their popularity sprang from their formula of straightforward reporting on scientific and mechanical developments, prescient journalism and DIY how to articles.


Initially Popular Science was a pure science magazine but in 1916 it moved with the times to add full-color covers extended the focus of its coverage and began including advertising.


Both Magazines are still being published today and both, naturally enough, have their own websites where you can subscribe and where the entire run of back issues can be viewed.

And the "Popsci" as it now calls itself here.

Or you can view all the back issues on line at Google Books.

Google Books is currently hosting "Popular Science" magazine and "Popular Mechanics" back issues in their archives which you can browse through online.

Or find Back Issues of Science and Mechanics Boat Builder Handbook for Sale Here. 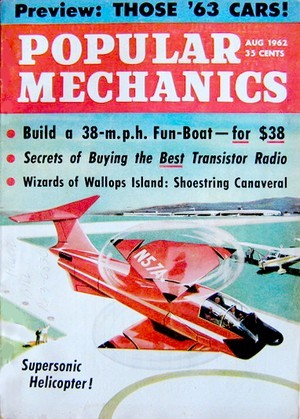 As well as telling their readers about all the momentous inventions of the era, they also gave them plans on how to create some of them.

Popular Science for instance included an article on how to build a Laser..(and I don't mean the sailing boat).

While some of the plans might seem a trifle off beat to us today, they did publish several timeless plans and instructions for the handyman.

For instance, Popular Science in February 1972 published pans on how to build a wood strip Trail Boat, a stripper canoe in two parts for car topping.

One of the most enduring set of plans appeared in the August 1962 issue of Popular Mechanics .

The appetite for Build It Yourself Boat plans was such that books of plans were also published containing plans for everything from Hydroplanes to Sailboats, Runabouts to Canoes and a few 'wacky' ones in-between.

I have put together a collection of the best of these plans here, which can be downloaded for free.

Plans for the PM-38 first appeared in the August 1962 issue of the Popular Mechanics magazine.

It was named the PM 38 because the magazine claimed that it could, not only be built in 38 hours, for a materials cost of a mere $ 38 but would, when launched, do 38 mph .

117 page, step by step instructions for building the PM 38 using modern plywood building techniques and materials. Yours to download (pdf) for
only $5

Mark, from Harpers Ferry in West Virginia, tells how he built a “Popular Mechanics PM-38” just like the one his father built back in the early sixties.

As he says the Popular Mechanics magazine gives you just enough information that you can build the boat directly from the magazine without any of the larger plans.

And despite the fact that he "had never built a boat of any kind before" have a look at what a wonderful job he has done on her.

Then scroll down to the comments. 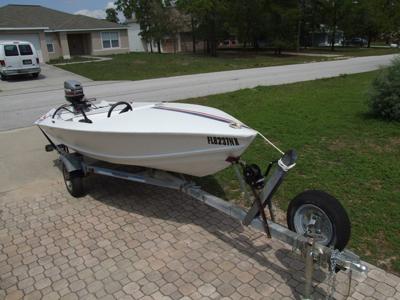 "It is still fun and the memories continue to grow." 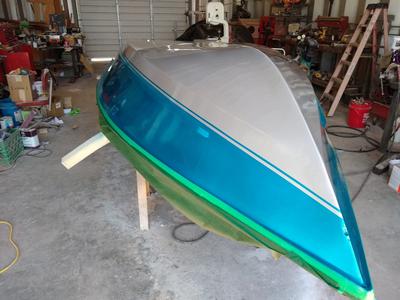 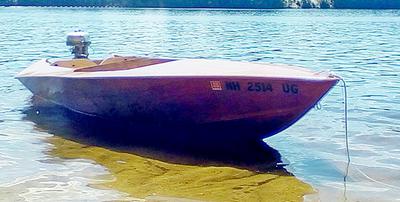 This is Robert’s version of the PM 38.

Carl Mouton from Durban in South Africa built a PM38 in 1962 when he was working in Aden.

Now that he has retired and has found the plans again he may just build another one. 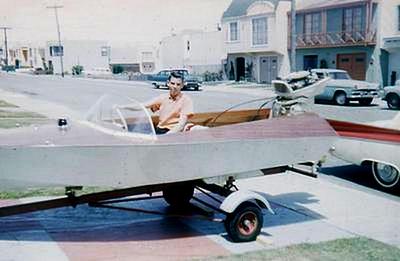 Or are you considering building one?

We'd love to hear from you.

Eddie Gregory in Ireland has built a 60's Sea Hawk. 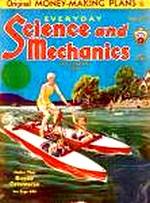 This is one of many designs published in the Boat Builder's Handbook.

Although not a PM plan she still deserves a mention in the PM 38 Club. 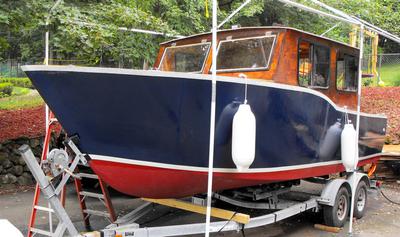 David has built a 22ft 'Sea Hawk', designed by William Jackson as published in Science and Mechanics Magazine.

You can download a FREE version of the plans here. 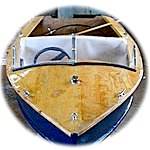 She is being built using the free "Mustang" plans from the Boat Builders Handbook and is another boat that deserves a mention in the PM 38 Club.

"Although she is not 100% finished, my youngest son and I just had to get it on the local lake while the fishing was still good.

This little boat performs really well for what it was intended, and I had lots of fun building it. " 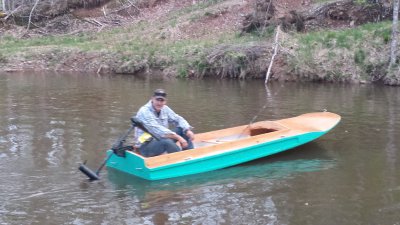 He has now built "Bill Collector" a 12 foot duck boat from the "Sneakbox" plans found on the Svenson's Website. 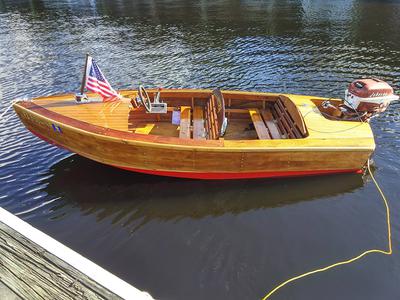 "Li'l Tipsy" is a superb version of 12' Mustang built and now being restored by Dean in Jacksonville, Fl. 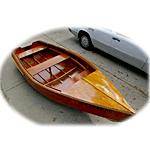 And Bryon thinks that his 1956 12 ', homemade, row boat may also have been made using the Mustang DIY plans.

You can download a FREE version of the plans here 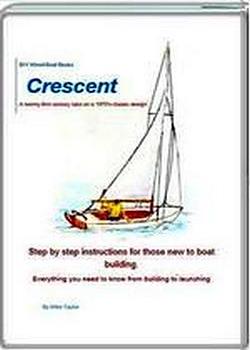 160 page, step by step instructions for building Crescent using modern plywood building techniques and materials.
Yours to download (pdf) for
only $5 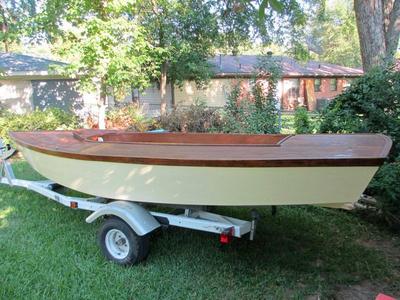 "Jewel" is a 16 'Crescent Sailboat being built by Mike Allen from the plans by CT .Allen in the 1958 "Boat Builders Handbook".

And what a superb job Mike is doing check out his photos here .

Another that deserves to be in the PM 38 Club. 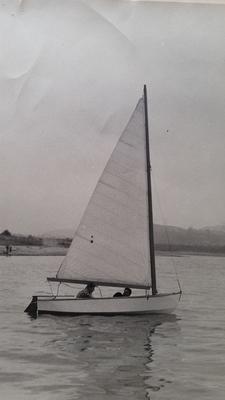 When Ron was 14 year old, in 1953, his dad helped him build this 12 foot sail boat using plans from Mechanics Illustrated. 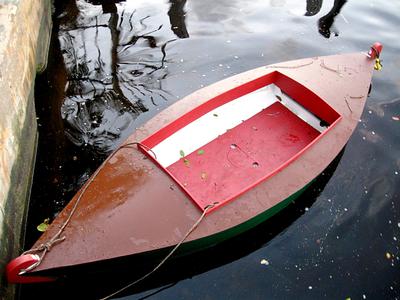 Pintail drawn from plans by Wm D Jackson is another from the Boat Builder's Handbook.

This one is being built by Greg Allore using the downloaded plans from Svensons.com that deserve to be in the PM 38 Club.

You can download a FREE version of the plans here .

(“Tiny Titan” was the original name of this design but when Glen-L published the plans in 'Popular Mechanics', the magazine changed the name because they thought that “Saucy Shingle” sounded better.)

The plans can still be obtained from Glen-L.

We all love to see what other Wooden Boat Builders and Restorers are up to.

PM 38
I have attached a few more pics of my PM38 I started last year, it is plywood, painted with candy apple blue over silver metal flake, the deck is 3/16 …

Not Named
I’m interested in building a PM 38 but am interested in the cost of materials in today’s market with the high cost of lumber. I’m also wondering if …

Posting about Your Boat is easy to do, just type into the form.

Or you may find it easier to type your entry in a word-processor, then copy and paste it into the form.

Don't worry too much about grammar etc as I will check your entry before publication.

The more information you give the the more interesting your post will be.

Please tell us as much as you can as we really do want to know.