The Ashcroft method of building small wooden boats using thin layers of wood could be described as an early form of cold molding.

Back in the days before epoxy and plywood construction, Herbert J. Ashcroft devised the method to make boatbuilding easier and cheaper for the amateur with limited woodworking skills. 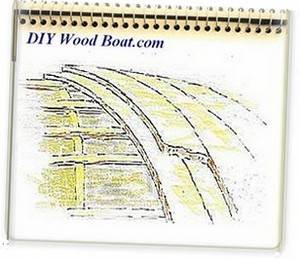 The Ashcroft method is an alternative to either carvel or lapstrake / clinker planking on small boats.

It was intended to be used on the type of construction where the boat would be built upside-down over molds.

The molds were to be set up and joined by longitudinal ribbands and stringers in the usual way.

However the 'planking' was made up of two layers of narrow, thin strips, laid diagonally to the boat's centreline.

The result was a hull similar to the later cold molding technique except that Ashcroft's strips were thicker than veneer and were all laid in the same direction.

The second layer of strips were laid at the same angle and direction but staggered so as to cover the joins in the first layer.

Having the second layer running at an angle to the first, as in modern cold molding would perhaps have made for a more ridged hull but Ashcroft devised the technique before the advent of modern waterproof glues.

The main advantage of this method is that a round bilge boat can be built by the amateur with a minimum of woodworking skills and a few basic hand tools.

Cost can be kept down by using few expensive metal fasteners and easily obtainable lumber.

All the 'planking' wood is made up relatively short lengths, eliminating the need to scarf or butt join and making it easier to handle.

All the strips are the same width and thickness so, there is no need to line out and shape the 'planks'.

Almost any rot-resistant wood will do that is not too hard, will glue well and bends fairly easily.

There is no need to plan the mating surfaces of the strips as they will glue better if left rough.

Narrow strips of marine plywood could easily be used instead of solid timber however, a certain amount of the material will be lost during the process of ripping it into strips.

Laying both layers in the same direction means that both layers can be 'planked' in one go instead of having to lay one complete layer before laying the second.

Laying them in the same direction also means that they can be clamped while the glue sets.

If this method was used with modern glues or epoxy joining the layers, it would produce a monocoque shell requiring very little need for internal support such as ribs.

And with the outer layer covering the joins in the inner layer there would be no openings or seams to leak. 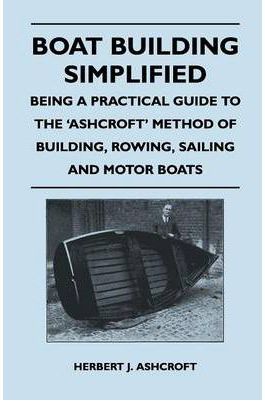 to Search for books on Classic Small Craft from an Independent Book Shop Near You.

While the Ashcroft method simplifies the process of planking it is imperative that care is taken over the initial setting up of the molds and ribbands.

The final shape of the boat will depend on the former being true.

And while the finished hull will require few stringers it must have sufficient ribbands to support the bending of the strips and keep the curves fair especially at the turn of the bilge or anywhere where the bends are severe.

The inner keel, stem etc and any ribbands that are to remain fixed to the finished hull as stringers need to have their inside surfaces smoothed and shaped.

They also need to be affixed to the molds but in such a way that they can easily be released from the molds when the hull is complete.

They could be held with twisted wire or even cable ties as in stitch and glue construction.

Originally Ashcroft fastened the planking and stringers with clench nails but if they are to be glued then the ribbands that are not to be incorporated in the hull need to be protected so they do not become accidentally glued. 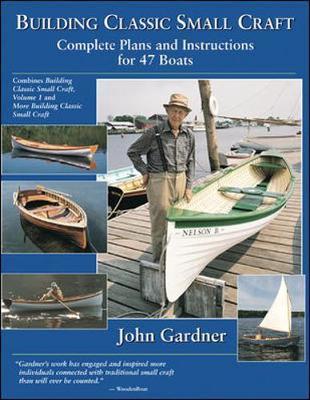 Something such as polythene or plastic tape on the outer edge should do.

However, the strips should be fitted together as tightly as possible and the glue spread so that as little glue as possible oozes through the gaps, especially with the first layer, otherwise there will be a lot of cleaning up to do at the end.

A glued version of this method will only need a few stringers.

Four on each should be sufficient, one to become the inwale, one to serve as a seat-riser, one at the turn of the bilge and another between that and the keel.

The Ashcroft method best used when building small boat where the strips can be thin enough to be easily bent around the shape without steaming.

If the strips do require steaming then they will have to be either nailed stapled or clamped in place and allowed to dry thoroughly before gluing, especially if using epoxy glue.

Laying the second layer at right angles to the first would produce a stronger stiffer hull.

However, the first layer would have to be complexly 'planked' and cleaned up before starting the second.

It would also have to be marked up to show the position of the underlying stringers.

And the second layer of strips would have to be held in place, while the glue sets, with staples or possibly with wire as in stitch and glue.

Once the planking glue has set the outer throat, stem etc can be fitted before removing the molds and turning the hull over.

It will then be ready to add the floorboards, thwarts etc and finish off as with any other planking method.