These boat nails are renowned for their holding power.

But what if you need to get them out?

The main factors governing the withdrawal resistance of nails are,

How the nail is driven, in relation to the grain of the wood. Nails driven into the end grain for instance will easily pull out. 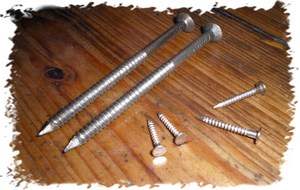 Several methods have been tried in order to improve the holding strength of nails.

The most successful of these for the wooden boat builder must be the Silicon Bronze Ring-nail.

The silicon bronze offers a high degree of corrosion resistance, it is without doubt the metal of choice for wooden boats fasteners.

This combined with the rings or barbs give these nails a tenacious holding strength.

They are often used in plywood on frame construction and for planking and decking.

Nails are sized by wire gauge, the bigger the number the thinner is the nail.

As these nails are somewhat brittle the ends cannot be bent over.

And this also means that they need to have pre-bored pilot holes slightly smaller than the nail gauge, especially in hardwoods.

Because of their superb holding strength ring nails will be almost impossible to remove without damaging the wood.

There are a few techniques which can be tried.

In softwoods it is possible to wriggle or rock the nail, using a tack-puller.

This effectively enlarges the hole slightly until it releases its grip on the nail.

If it is possible to get a hacksaw blade between the two fastened pieces, then the nail could be cut.

The next option is to drill off the head and either try prising the pieces apart, or use a punch to drive the nail further through.

If you are removing a damaged or rotten plank, another method is to use a hole-saw or plug cutter to cut around the nail.

Which brings us back to the choice of fasteners when you first start building or restoring.

Consider whether or not you might need to remove the fastenings in the near future before deciding on ring nails.

One of my earlier jobs on Mignonne was to replace both garboard strakes.

I used gripfast nails to fasten the new ones to the keel, hopefully they won’t need replacing for a long tome to come.

However, I have since read of one design where the garboards were screwed in place.

Initially it was done because there wasn’t enough space to allow for riveting.

But the extra benefit is that the garboards can be removed easily for repairs or just to clean the bilges.

“I grew to judge every purchase by how many bronze screws I could buy for the boat if I didn't spend on this or made do without that.”
(Lin Pardey)