Copper Rivets and Roves have long been a favoured fastening method in boat construction.

There are many advantages to using a copper nail and rove.

The Nail and Rove.

The most usual copper nail for riveting is square in cross section with a diamond point and flat head.

They can also be bought with a proud or rosette head.

Common copper nails with a smooth shank and a flat copper burr are also sometimes used.

The rove is a dished copper washer.

The rove should be slightly under sized so it can be driven tightly onto the nail without falling off.

Copper Nails are manufactured to the wire gauge, the higher the number the thinner nail.

And they are normally sold by weight.

There are only a few, simple tools needed.

Although they can be purchased from specialist suppliers the dollies can be easily made at home and the rest are standard handyman’s tools.

This could be the head of a sledge/lump hammer, a piece of propeller shaft, or even a large bolt if the nails heads are not countersunk.

For counter-bored nails it will either need a stud or tip protruding from one end or be tapered to fit the counter-bore.

The rove iron or set is rather like a large nail set which has a countersunk hole drilled in one end.

It is used to drive the rove down over the nail.

This can be simply made from a piece of heavy rod with a hole to suit nail size, drilled down one end and countersunk to fit the rove.


You might also want some hearing protection as peening rivets can be a noisy affair. 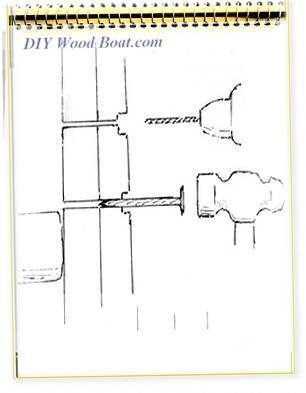 The first job is to tightly clamp the pieces to be joined.

Although the riveting process will draw the pieces together it is best to have them tight to start with, this will also prevent the pieces from backing away while you drill.

If you are replacing an old fastener, replace an adjacent rivet with a bolt to draw everything together.

Next, drill the pilot hole, one size smaller than the nail size.

Tap the nail through the pilot hole with the hammer while holding the bucking iron at the back.

Holding an iron to the inside next to the pilot hole will prevent damage to light construction, this may not be necessary on heavier constructions.

The end of the nail should be left protruding by at least ¼ inch 6mm, preferably longer.

Whether you finish off each nail as you go or not is up to you however, if the boat is being built upside down you may not have a choice.

Leaving the finishing off to last will mean having to work around all those spikes.

To fit the rove, the bucking /holding iron needs to be held against the head of the nail.

The rove is then ‘set’ using the rove  iron or set and hammer to drive it down over the nail.

The protruding part of the nail is then nipped off close to rove. 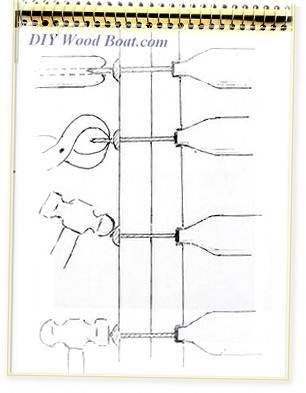 With the bucking iron braced against the knee or thigh hold it against the nail head, then peen or chase the rove.

Peening only requires a three or four hammer hits with the ball of the hammer around the side of the rove.

Then finally, two or three whacks on the nail end to flare the metal, then finish off with a few light taps to round it off.

Beware of too much hammering as this will only harden the metal, causing the peened end to crack.

Harden up old fasteners only takes a couple of whacks on the rivet while holding the bucking iron to the nail head.

It is probably due to this simplicity and the speed of insertion that the copper nail and rove has remained such a popular method of fastening.

Herreshoff’s Rules for the Construction of Wooden Yachts 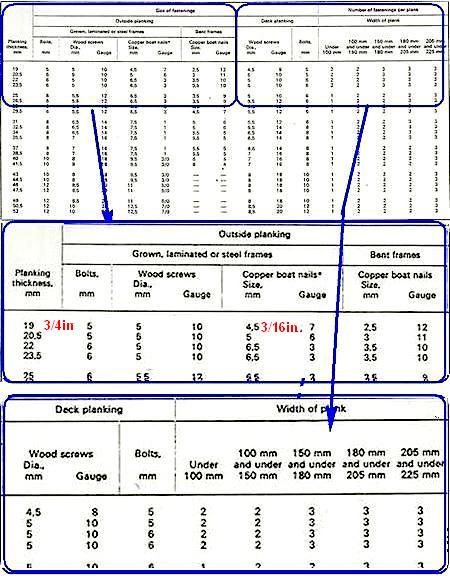 Riveting Comments
Very clear and accurate description of copper nailing. The only thing you forgot was the tedium involved if you rush ahead and leave the fastening …