Building the Popular Mechanics PM-38 from the August 1962 issue. A few people have asked about the popular mechanics PM-38 boat that I built so I thought I would tell a little about it.

I got the idea from my father who built the same boat back in the early sixties.

That boat rotted away years ago and was left in a farm field in Frederick, Maryland.

After figuring out what boat it was, and where he got the plans, I set to building one myself. 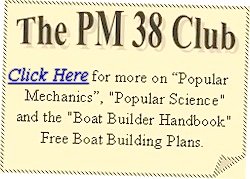 This was a new experience for me as I had never built a boat of any kind before, but I did have some wood working experience.

The popular mechanics magazine gives you just enough information that you can build the boat directly from the magazine without any of the larger plans.

All I did was go step by step and do one thing at a time, making very slight modifications as I went.

The hardest part of the build was getting everything to fit at the curved bow.

It was a little tuff for a first timer.

I broke one of the chines as I was bending it into place and two of the sheer rails.

The chines I steamed with an old iron right at the main bend and that finally worked it out.

Also, good luck cutting all the pieces out of the few sheets of plywood they call for.

It took me several extras.

I used fir plywood and boards through out.

I added a small frame/ support on each side in the rear of the boat to firm up the deck battens that run to the stern.

They were a little wobbly due to how far they extended with no support.

Two extra transom knees were added and an extra support on each side of the stern to help hold the sides onto the back of the boat.

I also increased the size of all the gussets and added a few here and there where it looked like it could use them.

I also didn't cut the bottom arch out of the control panel like the directions say.

If you do there isn't room to fit the controls on it.

You just seem to figure this stuff out while you are doing it.

The directions say you don't need to fiberglass the bottom of the boat to keep it from leaking.

I did anyway and sure enough not a single drop leaks into it while its in the water.

I could not find any commercially available windshields so I built one out of thick scrap wood and Plexiglas to resemble a criss craft or a feathercraft windshield.

It turned out nice.

We modified it to connect to the Evinrude motor I put on.

Lights were wired into the boat and a depth finder, etc...

For a trailer I found an old Sears and Roebucks trailer from the 1950's that some one had.

We put the boat out on the Potomac river at Harpers Ferry for the first time on memorial day 2010.

It ran great and handles very well. It seems to draw a lot of attention due to its old style and unique looks.

Anyway this is getting a little long winded.

Anyone thinking of building one is welcome to email me at Msreynolds1@hotmail.com if you have questions.

I would do my best to answer them.

So far I have talked to no one else who has built this boat, or is building one except my own father.

It is a great boat for a beginner to build.

It just takes some thinking to figure it all out.