How to Caulk and Carvel Hull

Anyone can caulk a boat, there is no magic involved. If I could do it, so can you.

On a new boat with its pristine seams it is pretty straight forward.


On an older boat it is a bit trickier.


However, anyone with a common sense modicum (which unfortunately isn't all that common) will have no trouble doing a competent job.

The main thing to be aware of is, not to over caulk, this could lead to strained frames as the planking 'takes up'.

Oakum, which is made from hemp soaked in pine tar, is normally only used on the larger vessels with planks over two inches thick.

For most small to medium boats; cotton, is by far the easier more versatile material to use.

If you are working on a newly built hull you may need to open up any tight seams.


This can be done with either a dumb iron or a raking tool.


The dumb iron works best on the softer woods, the raking iron on hardwoods.


If re-caulking, make sure to clean out all the old compound and cotton. 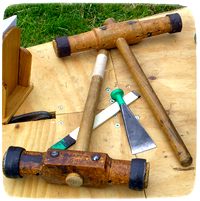 If you are going to use oil based putty as the caulking compound it is a good idea to prime the seams.


This can be done with an oil based paint.


It's a good idea to prime again once the cotton is in place.


This is probably the better method when re-caulking an old boat. If you intend to use a synthetic sealant such as 3M 5200 check the manufacturers' recommendations for priming.


My own preference is for old fashioned, cheap and readily available linseed oil putty mixed with red lead powder. 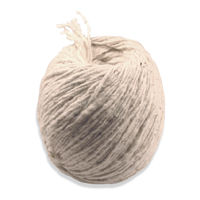 to find caulking cotton on

When it's time to start inserting the cotton where do you start?

Some like to do all the butt ends first, then start on the lower seams and finish off with the rabbet and garboard seam.

But, I do not see any harm in starting above the water line if you want to get into the swing of it first.

How many strands of cotton you use will depend on the size of the seams.

Ideally the cotton should fill the deepest third of the seam.

This means that when tapping it home the iron should go in by about two thirds of the plank thickness.

Add or subtract strands as needed.

But always remember , that it is to be tapped in, not hammered.

Do not over do it , that cotton is going to swell when wet.

And do not forget which seams have been done, you do not want to caulk a seam twice.

Some authorities suggest laying out enough cotton to do a full seam.

That is fine if you are laying it out in a perfectly clean floor.

The cotton is rather hairy and will pick up any and every bit of dirt or wood shavings from the floor.

I found that it was better to feed it straight from the ball, but keeping the ball in a box which can be pushed along with your foot as you go.

If you have to join strands mid seam do not tie a knot, this will produce a thick, hard lump.

Simply roll the ends together.

Start off by using the paying iron to push the cotton into a foot or two of the seam.

Then go back and using a rocking action with the iron, tap the cotton home with the mallet.

If there are any wide seams leave them for last.

By caulking all the tight seams first you could find that this has caused the wider ones to close up.

Wide seams can be done in two runs, increasing the number of strands on the top.

The reason a carvel planked boat keeps the water out is that both the wood and the cotton swell when wet, effectively sealing the joints.

The caulking compound while it does help waterproof the seam is there mainly to help hold the cotton in place and fill those gaps.

When mixing this putty take a tennis ball sized dollop of the putty, mix enough red lead powder to give an even red color, add linseed oil, if needed, to keep it soft.

Then add a thumb nail sized dollop of multi-purpose grease to the putty, mix it in well and push the putty into the seam with a putty knife.

The grease will help keep the putty soft and flexible thus preventing hardening and cracking later.

It has recently been brought to my attention by Bill in Canada, how difficult it is to buy red lead powder in many countries.

Fortunately there are alternative commercially available oil based compounds such as those by Pettit and Interlux.

There are plenty of silicon and polysulphide substances around, these are probably fine if you are caulking clean oil free new wood.

But on an old boat's seams it is extremely unlikely that the planking has not absorbed some oil or other substances that would make using a synthetic compound worse than useless.

The seams most likely to be oily are the garboard seams, which are also the seams you do not want to have future troubles with.

And some of these compounds, when they do stick, adhere a bit too well.

By the way, do not be fooled into believing that any of these 'magical mastic' will eliminate the need for the cotton.

When it comes to launch day you might find that some of the seams have opened up.

Do not be tempted to add any more caulking cotton.

You can add some more of the paying compound but this will probably end up being squeezes out as the wood and cotton take up.

Providing the gaps are not excessive it's better to use a temporary method of stopping.

Tape over the cracks with masking tape, this will slow water intake sufficiently while the planks take up.

Or fill the cracks with soap, use bar soap rubbed into the crevices this will eventually just wash away.

Or you could use Slick Seam compound

Having said all that, I do not mind admitting that when I launched Mignonne after her rebuild I was as nervous as any expectant father.

Fortunately the yard crew were aware of the problems affecting wooden boats and allowed her to sit in the hoist slings for some time before setting us adrift.

How quickly she takes up will depend on the wood of the planking.

Soft woods will usually take up faster than hardwood.

Mignonne with her hardwood planks took a month before the seepage slowed appreciably.

And now no more than a cup full per week gets in.

Considering that this was my first attempt to re-caulk a complete hull, the fact that she did eventually become water tight just goes to show that anyone, with a little care can do it.

Fixing a rough boat cheaply in order to move it
There is an old long keel sailing yacht in poor condition in the yard of a UK marina. The yard is destined to become a high rise luxury hotel so the …

New Old boat owner
Nice.article, I just bought a 1958 Chris Craft. I am trying to figure do I calk or install a 5200 bottom on. Sounds to me this may be the …

Launch Day
With a boat which has been laid up for the winter, it's a good idea to have some sawdust and a broom on hand. After the boat is in the water, cast …

Caulking methods
Hi. I am restoring a 1930 Richardson "Little Giant" which was totally rotton. I have now reached a point where I need some advice. The hull is made …

Best caulking product for sealing wood boats
Good evening What is the best product on the market for caulking seams on a wooden boat. Maureen Comments Caulking Products by: …

Cauking a thoroughly dried-out hull.
Good day boaters, I have recently taken on a 13ton Hillyard ketch which has been left ashore in Spain for 7 years and so is completely dried out. …