Wedge seam construction or wedging has occasionally been used in the past to build boats.

Today the wedging technique, sometimes referred to as ‘splining’ is occasionally used to repair the seams on carvel planked boats.

Very basically it is carvel planking but with the caulking replaced by a thin slat of wood that is glued into the seam.

The result is a construction that is closer to glued strip planking than caulked carvel.

However, these days glued strip planking is a much simpler method to achieve a similar type of hull without the problems associated with wedging.

The major problem with a wedged hull is keeping the moisture content of the wood reasonably constant.

The Wedges or Splines 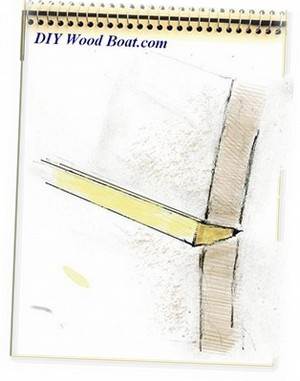 The wedges are long very thin tapered or wedge shaped strips or ‘splines’ of wood.


These are then glued into the bevelled seams between the planks.


The contention was that using wedges was faster and required less skill than conventional caulking.


Fine I suppose if you happen to have the machinery able to cut long thin strips with a regular thickness and taper as well as bevelling the seams with a consistent width and uniform angle.


Some builders used wedges are ripped from the same wood as the planking others a softwood and others have suggested mahogany.


The only consensus seems to be that it should be a wood which will glue well.

However, it is import to use dry lumber preferably with a moisture level similar to that of the planking.


The length of the wedges can is unimportant as they can be but jointed however, three to four foot lengths are easier to handle and glue.


The width of the strips needs to be wider than the depth of the groove, the excess is trimmed off and fared once the glue has set.


While they are referred to as wedges, they are usually trunked wedges.


The angle of the tapers can be as much as 10 degrees however, it is preferable if the wedge tapers by a degree or two more than the groove.

The usual practice when building with wedge seam construction was to cut and fit the planks just as if they were to be caulked conventionally.


Then the seams were cut or grooved to a uniform V with either a router or a ‘Skilsaw’ with a specially tapered blade.


The groove is cut to a depth of 3/4 of the thickness of the planking and wide enough to remove all traces of the old joint surfaces.


In order to keep the saw or router tracking along the seam required a guiding batten to be nailed below the seam.

The wedges were coated with glue and then lightly tapped into the seams with a mallet.


Where the planking had considerable curvature the ends of each wedge were ‘anchored’ with a temporary nail.


Older boats will most likely have been glued Aerolite or something similar.


More recently wedge seam construction has used epoxy to glue the wedges and seal the planks.


One technique was to roller or brush the resin onto the wedge and brush the hardener into the seams.


Wedges were simply butt jointed with plenty of epoxy the ends.


Once the glue has cured the protruding ‘head’ of the wedges are trimmed off.


This can be done with a flush cut saw then finished off with a disc sander or planed off flush with the hull.

Normally wedge seam repairs are only used as a delaying tactic to keep an old tub afloat for another season or two.


However, Thomas Larsson is successfully using this technique in Sweden to keep their vintage wooden boat fleet afloat.


Thomas describes his method of wedge seaming or ‘splining’ in his book the “Big Book of Wooden Boat Restoration”.

The technique is used mainly on old boats that have been re-caulked so many times that the seams have become uneven, so wide that the caulking has been driven right through.

All the old caulking is first removed then the seams grooved with a router or saw as described above. 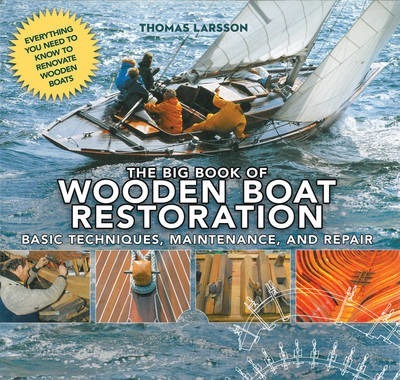 to Search for books on Wooden Boat Restoration from an Independent Book Shop Near You.

Wedge seams can stop leaks and stiffen up an old boat.


However, there are a number of caveats.


There must be no distortion or hogging of the hull, wedging will not correct this, on the contrary it will make it permanent.


The frames and plank to frame fastenings must be in good order.


The planking should be reasonably dry before starting to wedge seam an old boat.


Once wedged the moisture content of the planks must be kept reasonably constant.


If the planks are allowed to expand and contract unduly the planking will be pushed away from the ribs, fastenings will fail and ribs may break.


It is best to keep a wedged boat in the water all year round.


However, a wedge seamed boat can be hauled out for the winter providing the ambient atmosphere is reasonably damp. 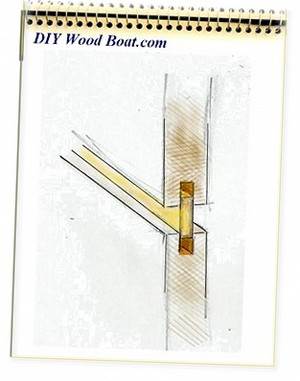 Thomas Larsson refers to this technique as ‘Splining’ in his “Big Book of Wooden Boat Restoration”, p 87 to 95.


However, this should not be confused with Splined Seams as described by Larry Pardey in his book “Details of Classic Boat Construction” chapter 21 page 368 to 390.


The Pardeys used this method to build the transom on “Taleisin” however, the splines were not glued