There is no great mystery to caulking.

All it takes is common sense and a light touch.


The biggest mistake is to over do it.

However, a profesional boat builder would have access to a brazier and blacksmiths tools in the yard.

So you may at least have to buy one or perhaps two irons.

Irons can be bought in sets or individually. 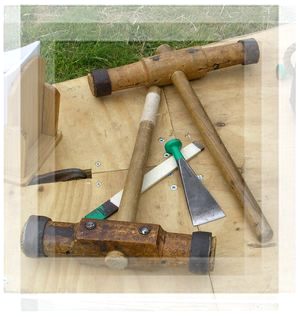 Before we go any further let me say that I completely re-caulked Mignonne with; 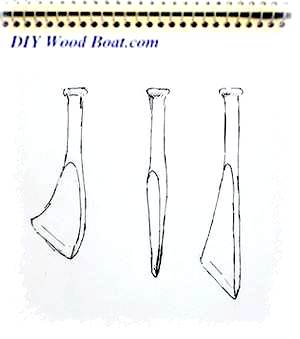 The Dumb Iron is used to widen out any seams which are too narrow or closely planked to allow the cotton in.

You can widen hardwood seams with a rake but this is not advisable on soft wood or on end-grain such as butt seams or nib ends.

Making Irons, otherwise known as Crease, Starting or Putting Irons are for putting the cotton into the seams.

They come in various thicknesses to suit the width of the seam.This is the one tool which you will need.

Nib or king plank irons are just narrow making irons used for areas where a standard iron would be too wide to fit.

Areas such as nib ends and curved seams.

Bent irons are standard irons which have been curved to allow access to those awkward places like garboard seams. 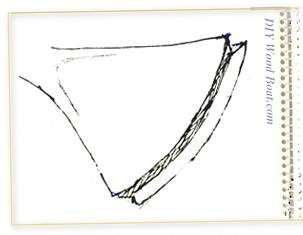 The purpose of the Hardening iron is to firm down the cotton into the seam.

It has a curved edge with a groove.

But it is fatal to harden down too much, remember that too much force will be worse than too little.

Over caulking can lead to broken frames when the planks take up.

I found with Mignonne's narrow seams that I was able to 'harden' down quite easily with the making iron.

The reason for the shape of those odd looking mallets with a long head and sort handle in order to encourage short taping, as opposed to walloping the iron.

I have looked at them hefted them and decided that for me personally they seemed rather clumsy so I prefer to use an ordinary wood working mallet.

Never use a metal mallet or hammer as it will be too forceful. 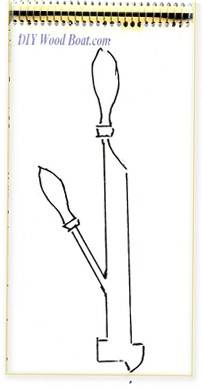 If you are re-caulking an old boat will first need to clean out the old compound and the old cotton.

You can buy raking irons specially made with two handles which give the power to remove that old hard compound and control the cutting edge so as not to damage the wood.

Or you can do as I did and make a rake out of an old file by bending the tine into a hook.

Sharpening the inside of the hook.

Then wrapping tape around the blade to make a handle.

However using one of these you have to be very careful not to allow it to wander and damage the edges of the seams. 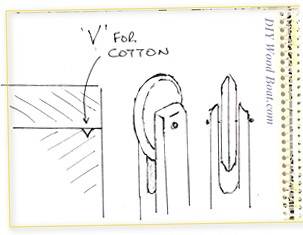 This can be used to place the cotton in the seam.

Also handy for making a V shaped track between mating surfaces along which a strand of cotton can be laid.

This isn't necessary on a glued joint or if using a bedding or sealing compound.

"There is but a plank between a sailor and eternity."
(Thomas Gibbons)