One of the problems associated with restoring or building a boat is that almost all components have complicated curved shapes.

But it is those curved shapes and lines that make a boat such a thing of beauty.

A spiling batten traditionally is used to record the shape of the bottom edge of each new plank at the moulds.


The batten is then used to transfer this shape to the planking stock.


When it comes to replacing an old plank or panel the most obvious way is to copy it by simply tracing around the old one.


However, getting an old plank out without it breaking or distorting is much easier said than done.


Many boat builders and restorers have a favourite way for tracing out the shape of a plank or bulkhead.


The most common rely on using an intermediate, partial ‘pattern board’ or ‘spiling batten’ on which the distances to salient points on the object to be copied are marked in such a way that they can later be transferred to either a full sized pattern or the planking stock.


These points can then be joined by a continuous line using a fairing batten.


Other methods include tracing and building a skeleton mock-up. 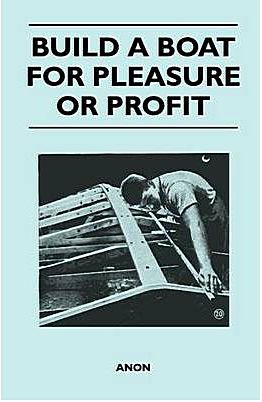 to Search for books on Building Wooden Boats from an Independent Book Shop Near You.

The Tick or Joggle Stick 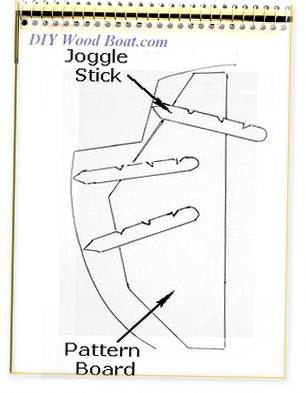 This is probably the simplest and most accurate method for copying an oddly shaped plank or panel.


The ‘stick’ can be any old scrap of stiff timber cut to a suitable length, pointed at one end and notched asymmetrically.


You will also need a ‘spiling batten’, this can be a scrap piece of thin plywood.

For copying the shape of a plank the ‘spiling batten’ wants to be the full length (several pieces can be butt jointed with glue or staples) but narrower than the original plank.

The ‘spiling batten’ needs to be tacked or clamped to the ribs in the gap left when the old plank has been removed.


There should be sufficient clearance to ensure that the batten is not distorted by pressing against the planks above and below.

Giving the board a coat of white undercoat will make it easier to see all position marks.


Before starting to use the tick stick it is worthwhile marking the positions of all relevant underlying structures such as ribs, fastening positions etc.


Now you have that set up place the ‘stick’ flat on the ‘spiling batten’,  place its point at a position on the hull/plank that you want to record and then trace the outline of the stick onto the ‘pattern board’ with your pencil.


Repeat this for as many points as will be needed to recreate a complete profile of the plank shape.


When you feel that you have sufficient data on the batten take it down and lay it and clamp it firmly to the new planking stock or panel.

Now place the tick/joggle stick carefully within those pencilled outlines on the batten and then mark the position of the point onto the new stock.

"Every man's work, whether it be literature, or music or pictures or architecture or anything else, is always a portrait of himself."
(Samuel Butler, 1612-1680)

Because of the asymmetrical notches on the stick it will only fit within the pencilled outline the same way up as it was when the outline was drawn.


Then all the position points can be joined up using a faring batten and or straight edge.

The faring batten is just a long thin strip with straight edges that will bend evenly, straight grained wood is ideal for this.

Some builders/restorers use a similar technique but instead of that notched stick they will use a pair of dividers or compasses or even a small block to mark the positions.

If you also transfer all the positions of ribs etc these will help when it comes to drilling for fasteners and as datum marks for positioning the plank.


It is almost inevitable that the plank will need some trimming, it is imperative that these datum marks are used to offer up the plank in exactly the same position each time.

Certainly these methods will work but extra care must be taken to ensure that the distance between the divider points remains the same for every mark and the angle at which it is held must also be the same.

Another way to spile is to make a truss like template.


This can be done for almost any shape.


The template is made up using scraps of light timber or plywood glued together in situ with the hot glue gun or stapled.


For a plank, using long flexible battens for the upper and lower edges will provide an almost perfect pattern.


Do remember to mark all reference positions such as ribs etc.


A hot glue gun is convenient way to make ‘trusses’ because the glue sets quickly and is easily controlled.

Having cut a plank so that it fits in the space in between the adjacent ones is not the end of the story.


The back of most planks will need shaping so as to sit snugly and evenly on to the supporting ribs.


If the plank doesn’t sit tight and evenly against the curve of the frame or rib undue pressure on the ‘hard spots’ could cause the frame to fracture at that point.


In most cases the back of the plank will need to be cupped, made concave.


When cutting a new plank that is going to require a lot of cupping it is best to begin with timber that is a fraction thicker that the original planking.


A piece of stiff card can be used to trace the shape of each rib then cut out to make a rough guide with which to check the cupping.


Then finally fair the back of the plank between the frame locations.


Even if steaming were an option it is unlikely that a plank could be bent across its width without it splitting along the grain.

'Edge setting’ is a way in which minor tweaking of a plank shape can be accomplished by clamping it hard down onto the plank below.


However, this is something that can only be done when building and the amount of ‘tweaking’ is minimal.

Occasionally you may need to record the positions of a more complex set of underlying structures, such as the beams under a deck panel.


One easy method is to use a sheet of reasonably stiff, clear, polythene sheeting.


Not only can you see through it when positioning but you can easily cut it and mark out the positions of underlying beams with a marker pen.


The only problem is that this kind of sheeting is easily stretched and distorted, it is not ideal for long thin traces such as planks, it is better to use a proper stiff spiling batten.

Why Lofting?
I am new to boat building and am reading "The Wooden Boat Manual" (Robert Steward). I can't understand why the curves of the sections on the full-size …