Fitting hard wood covering boards around the edge of a boat deck and a king plank are finishing details which will enhance the appearance and value or your boat.

However, apart from being decorative, their main purpose is to protect and seal the edges of the deck covering.

They can also be used to good effect around deck openings such as cabin trunks and hatches.

There are several different methods and reasons for fitting cover boards.


While the basic concept is the same, how you go about it will depend on the deck covering.


Covering boards are an essential part of fitting a laid deck.


They are also used to frame and seal the edges of fabric covered decks.


Plywood decks can also benefit from being framed by cover boards.


The boards are made up of several shorter planks scarffed together to provide a continuous edge to the deck.


As a rule they lie on the sheer-strake and are usually the same thickness as the rest of the deck.


The covering board is also the place where all those stanchions and fairleads are sited. It is particularly important to keep the joints between the coveting board the deck material and hull planking, frames etc watertight.


This will be aided by placing caulking cotton in a V shaped track between mating surfaces.

It is essential that the edge of the deck and cover board are supported by either a batten or carline let into the deck beams, or by blocking between the beams.

In order to get the support in the correct place your first task will be to mark on the beams the position of the join between the cover board and the deck.

Use a springy fairing batten tacked to the beams with small nails allowing the batten to springs fair.

Blocking will provide better support for the cover board scarfs and deck plank nib ends.

If using a ribband this will need to be wide enough to support the nib ends of the covering board scarf and the deck planks if laying a planked deck.

The tops of the beams, breasthook, anywhere where the cover board is to sit will need to be planed flat so covering board will fit flush. 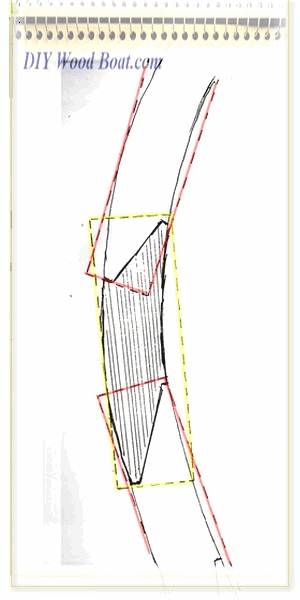 Due to the curvature of the hull cutting the covering boards from one piece would be very wasteful of wood.

So they are normally made up from short lengths scarfed together.

Cutting the scarfs will require some skill and patience.

You will probably have to make adjustments to the scarphs to get them to fit tightly.

So, always leave cutting the outer edges of the boards until all the scarfs are cut satisfactorily.

To facilitate the cutting of the scarfs make up plywood patterns for both sides.

Or make a jig so that they can be cut using a router, this will save a lot of time as well as producing accurate joints.

The inside corners can be cleaned up with a sharp chisel.

Once all the scarfs are cut fasten the boards in place and then mark out the inner and outer edges using the spiling batten.

To ensure that the nibs remain watertight, drill into the edge of the nib joints and fit softwood stopwaters.

The sections used to make up the covering board could be butt jointed.

While a butt joint is the easier than scarfing it will not look as good and will need more fastenings to ensure it secures it and keep it watertight. 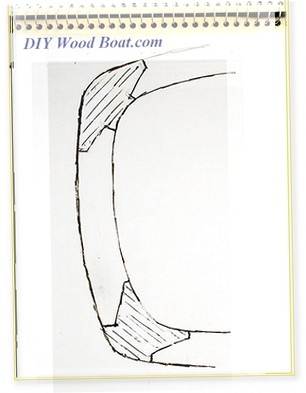 Not only is it good practice to run the cover board across the transom it is also very pleasing to the eye.

It is possible to join the transom cover board to the side board with a simple miter joint.

However, you do not want any sharp ends to extend to the outer edge.

Even the best of us can occasionally catch that back corner when leaving a dock.

It is better practice to make the corner from a separate piece.

And this will allow you to create a more pleasing radius to the inside of the corner.

Do not forget that the transom board will also need support blocking to prevent the decking and covering board from working.

The joint at the bow can also be made by setting in a separate corner piece. 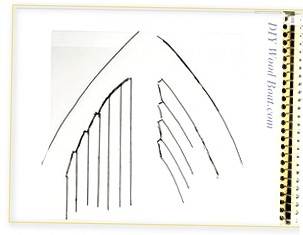 There are two main styles of laid deck the sprung plank and the straight laid.

The sprung deck, without a doubt is the better looking however, the straight laid deck can look pretty fine too.

With both types the plank ends will need to be nibbed to avoid having vulnerable sharp corners.

The sprung deck will need nibbing where the planks end at fore and aft elements such as the king plank or cabin sides.

The straight laid deck will need to be nibbed where the plank ends meet the cover board. 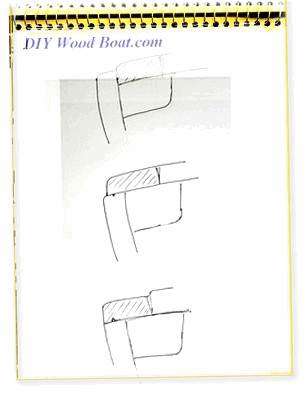 Some builders use a margin or nib plank set inside the covering board.

The nibs are then cut into the margin plank rather than the cover board.

However, nibbing is only needed on the sharper plank ends, where the angle is less than about 20 degrees.

It is probably best to cut each nib and mark and cut the covering board or king plank as you lay each plank.

A really smart way of dealing with the openings in a laid deck is to frame them with cover boards.

It does mean that you will need blocking or a carline underneath to carry the plank edges.

However where the sides of the opening run fore and aft and have little curvature this may not be needed.

Canvas covered decks are something of a rarity theses days.

It used to be quite a common method for sealing planked decks on small boats.

The primary purpose of the cover board on a canvassed deck was to seal and secure the edges of the canvas.

Though in some cases a hardwood spline was used to trap the edge of the fabric into a rabbet either in the covering board or in the deck with the cover boards fitted against the spline.

The idea of ​​the spline was that it was easier to remove, if the canvas needed repair than removing the whole cover board.

The deck edge covering boards should be either flush with the deck or slightly below the deck level to allow water to drain away quickly and not be allowed to settle along the plank edge.

The king plank on the other hand being at the high point of the deck curvature could be set on top of the canvas. 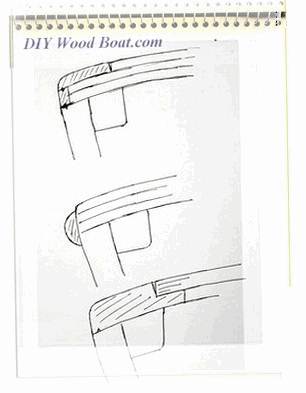 The king plank on a plywood deck can also be set on top of the joint between the panels.

Hollow the underneath of the plank to allow plenty of room for sealant.

Cover boards for a plywood deck need to be organized to protect the end grain of the plywood.

The inside seam of a flush fitted cover board is particularly vulnerable to leaks, so particular care must be taken over the securing down and sealing of these edges.

If the deck is made up from laminates of plywood the covering boards can be set in line with the top laminate but on top of the lower ones.

"Sailors, with their built in sense of order, service and discipline, should really be running the world."
(Nicholas Monsarrat)