Good ventilation will allow air to circulate through your boat prolonging her life and making it more comfortable for the crew.

Wooden boats suffer less from condensation problems than GRP and metal boats due to the superior insulation properties of the wood.

However, good air circulation should not be ignored. 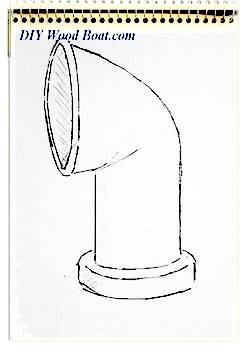 The lack of ventilation below decks will lead to no end of problems.

Effective boat ventilation must allow the air to circulate through as much of the below decks area as possible, fresh air in and stale air out.

It is no problem ventilating your boat when you are at anchor or moored on a sunny day.

Having the hatches and port-lights open will provide plenty of ventilation.

However, the real problem is when everything is closed up, either because you are at sea, the weather is bad or when you are not on aboard.

That is when ventilation on most boats is insufficient.

A single vent will not allow the air to flow.

A minimum or two well separated vents are needed to allow dry air to flow in and allow the damp air to escape.

Even when you are aboard, having vents in the heads and over the galley area will help remove lingering smells.

And an intake vent in the main cabin will maintain a steady flow of air keeping it cool in hot weather and in cold weather reducing the danger of carbon monoxide poisoning from a heater.

There are many aspects of ventilation and air circulation should be taken into consideration at the design stage.

Louvered Vents can either be fixed open or hinged so they can be either open or closed.

Fixed louvers will allow air to pass but will prevent rain from entering.

The most basic and least expensive are the small vents for ventilating fuel lockers, bilges, deck boxes, lazarettes, behind electronics or fitted into hatch boards.

They are available in a variety of metals or even plastic.

Fixed louver doors are relatively easy to build from slats of wood and are an excellent option for lockers.

For hatch boards and vertical hatch doors individually hinged louvers can be shut to prevent water washing upwards through them.

Solar powered vents use an built in solar panel to run a small fan during daylight, some units also recharge internal batteries that allow the fan to run at night.

One solar vent can effectively exchange the air inside a small boat several times per day as long as it is pared with another suitably separated inlet vent.

You can install two or more, setting one to intake and the other to exhaust by changing the fan blades over.

Unfortunately while solar vents will keep out rainwater they won’t keep out green water.

But being solar powered they will not drain your 12 batteries.

Dual speed 12vDC vents are among the most efficient topside vents.

However they should only be used on boats with multiple battery systems.

There are portable models that run o their own batteries which won't drain the ship's battery.

There are many fans available such as oscillating fans, compact models and fans that run on either 12vDC or their own batteries.

Dual 12vDC/Solar Vents use solar power during the day and run on the ships battery power at night to ensure a high air flow.

Bilge Blowers are really only necessary in motor boat with big engines to clear dangerous fumes from the bilge.

The favorite method for keeping the elements at bay while the main hatch is open, is with a cockpit dodger or spray hood.

Storm-boards will help keep breaking sea from getting below.

On my previous boat the bottom two boards slotted into place while the top one was hinged to the second, allowing for quick opening and closing.

A fore hatch which is hinged to open facing forward will be better at funneling air while at anchor.

Hatches can be ‘hinged’ so as be raised, removed, or propped up in any of four directions in order to scoop air. 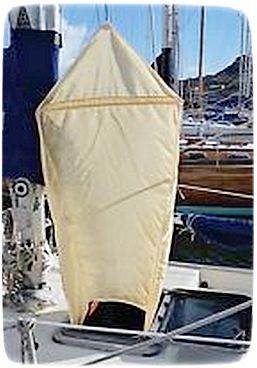 to find Wind Scoops on

A wind scoop will encourage air to find its way below through an open hatch.

Usually they are made from light sail cloth such as an old spinnaker.

They can be suspended from a halyard with battens to help them hold their shape.

They should be easy to douse quickly should it rain as will happily funnel rain and spray below. 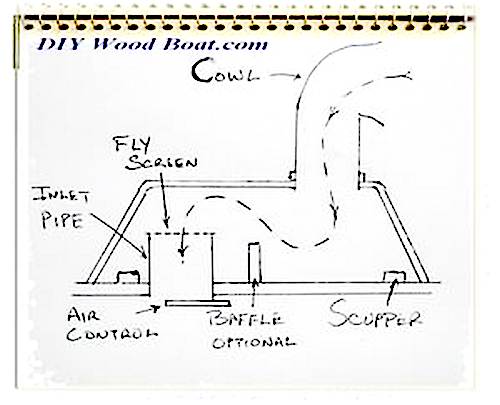 The most efficient all round passive vent is still the cowl vent with a dorade box.

The cowl is a vertical pipe with a bell-like horizontal opening which stands up from the deck and can be rotated to face into the wind.

The cowl on its own will also admit water so it needs a dorade box to keep this at bay is necessary over cabin areas.

A pair of decent sized dorade vents can be amazingly effective if one is facing into the wind and one away from the wind as an extractor.

For those making their own dorade boxes metal cowls in a variety of sizes can be bought from specialist chandlers.

However the flexible plastic varieties are an excellent alternative as they are less likely to foul lines and will be kinder to your shins.

Some of the plastic ones have a habit of turning brown in prolonged strong sunlight.

This however, can be touched up with the type of spray paint used for coating vinyl plastic.

Dual solar and 12 volt vents who sells them ?
Years ago I had a solar vent that also had a 12 volt switch. I do not see this type offered in the standard catalogs anymore. About to lay up for …

"Being hove to in a long gale is the most boring way of being terrified I know."
(Donald Hamilton)