Uncle Charlie has actually had to pay to stop in marinas more than once.


He still hasn’t recovered from the experiences.

There was a time, in the good old days before 'Yacht Harbors' became organized, well run businesses when it was possible to park up for the night without paying.


Uncle Charlie’s route would be planned so they would arrive in the early evening when the marina staff, one man, his dog and a boy had gone home for the evening.

And an early morning departure would get them out before anyone turned up asking for money.

Unfortunately one morning they overslept and were roused by a muscular female attendant with a mustache like a dray-horse, demanding money.


Even Uncle Charlie wasn’t brave enough to argue with her.


In Uncle Charlie’s opinion, marinas these days are more like high security POW camps with their fences, clanging gates, floodlighting and grim-faced ‘warders’ patrolling the pontoons at all hours.

Mind you his aversion isn’t shared by the rest of his crew.


Auntie Gladys and Cousin Doris would be more than happy to pay for the facilities such as proper toilets and showers.


And they could happily spend a day browsing the natty boutiques which seem to be part and parcel of the modern marinas.


Then too for Cousin Doris, there is the attraction of all those bronzed young men of the racing fraternity in their natty shorts.


Avoiding such dens of iniquity does cause Uncle Charlie passage planning problems.


You’d think navigation would get easier with practice’ He’d mutter as he plans a zig zag course from one to the other of the few free anchorages left. 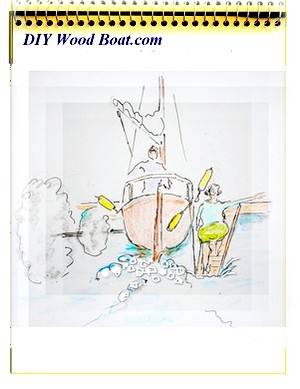 But truth to tell it’s not just the money which deters Uncle Charlie, it’s the whole business of maneuvering in a marina with “Panope’s” dodgy gear box.

Uncle Charlie’s approach to a tight spot usually begins with a relaxed smile until it is time to slow “Panope’s” approach by putting her in reverse.

Then his smile becomes a mirthless rictus, his knuckles whiten, he bangs the gear lever into astern, nothing happens apart from thick belch from the exhaust.

Passers by on the harbor wall stop shade there eyes, the cockpits of nearby boat fill with spectators, skippers start putting out all their spare fenders.

Then at the last minute there is a frothing under “Panope’s” stern, Uncle Charlie’s breath whistles out like a punctured inflatable.

The bow dips propelling auntie Gladys neatly on to the pontoon, the end of which sinks under her considerable weight, low enough to go under the fenders at “Panope’s” stern which the prop walk has now slewed against the pontoon.

As the exhaust cloud clears uncle Charlie and cousin Kevin appear, like pantomime genies finishing off “Panope’s” mooring with a varied selection of rope off cuts, while Auntie Gladys and Cousin Doris have escaped to hide their blushes in the ‘facilities’.

Ulysses the dog, nose to the ground disappears in a flurry of scrabbling paws in search of anything upright to anoint with his presence and the twins having tired of staring through neighboring portholes go in search of something sticky to eat.

Meanwhile nearby skippers revise their departure plans and the harbor master, having finally uncovered his eyes contemplates taking up holy orders.

No such Marina problems down at the club moorings.

With practice uncle Charlie can usually coast gently up to his pick up buoy, then it’s just a case of hooking it and getting the loop on the riser over the king post.

Then haul on the link line to pick up the stern mooring.

Even if they have some way on, as long as someone is quick enough to get the loop over a cleat there is enough scrap iron and old chain on the bottom to stop the QE2.

And if they miss, there is always Freddie’s boat further back on the trot with plenty of old car tire fenders to bounce against. 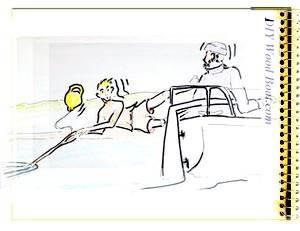 Of course the trick is to secure the mooring as quickly as possible and not just hold it as Cousin Kevin once did, just as a gust of wind blowing up the creek caught “Panope’s” stern.

Marinas as far as uncle Charlie is concerned have only one saving grace.

They are somewhere to pack in all those plastic boats and keep them out of the waterways.