The Bucket is one of the most essential and versatile pieces of equipment on Uncle Charlie's boat.

His dream is to own one of those well varnished, cedar pails as beloved by Francis Herreshoff the American yacht designer.

But, until he can find one cheap enough, the black rubberized variety remains his favorite

He did once consider the purchase of a galvanized one after reading Bill Tilmanâ's recipe for his 'Majestic Duff in a Bucket'.

But the rubberized type is more comfortable to sit on than a galvanized, it's still heavy enough to sink easily and it's quieter. 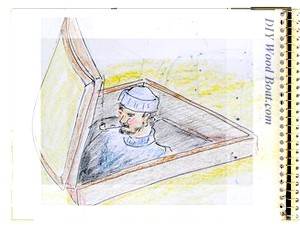 Quietness being essential when surreptitiously making an early morning offering to Neptune, don't want to alert the neighbours, if there are any, to the ceremony.


Uncle Charlie's favorite has a lanyard eye spliced to its handle and a fancy stopper knot on the other end, testimony to a relaxed morning sat in the fore peak.


Oh, by they way, tread lightly if crossing "Panopeâ's" fore deck in the early morning, Uncle Charlie likes to sit on his 'multipurpose utility vessel' below the open fore hatch.

Of course that is not the only use that Uncle Charlie's bucket gets put to, it's also kept handy for anyone felling seasick and it's regularly used for the washing up.

Plus they do say that no bilge pump can compete with a frightened man with a bucket.

Mind you, there are a few safety precautions that need to be taken into account.

If trailing the it overboard while underway, don't wrap the lanyard around your wrist, it can easily drag you overboard.


And watch out when washing up circular plates, don't let them get stuck in the bottom, they can be the devil to get out again.


When emptying it in the early morning while at anchor, check the position of any neighbours and the state of the tide.


Early one sunny morning Uncle Charlie was anchored in a pleasant cove with only two other boats anchored about a hundred yards away.


After having had a good look around checking that there was no sign of life on the other boats he 'made his sacrifice to Neptune'.


Then as he sat back in the cockpit to enjoy his coffee he noticed that the tide was drifting the contents of the 'commode' towards the other boats.


"Lovely morning like this, they don't know what they are missing."


Within a few minutes of him thinking it though, a gaggle of children, along with their respective parents began to appear on the decks of both boats.


All in their swimming costumes!


Within seconds all were jumping overboard, just in time not to miss out on Uncle Charlie's contribution to the beautiful morning.

A sailor meets a pirate in a bar, and they take turns recounting their adventures at sea.

Noting the pirate's peg-leg, hook, and eye patch The sailor asks "So, how did you end up with the peg-leg?"

The pirate replies "We was caught in a monster storm off the cape and a giant wave swept me overboard.

Just as they were pullin' me out, a school of sharks appeared and one of 'em bit me leg off".

"Blimey!" said the sailor. "What about the hook"?

"Ahhhh...", mused the pirate, "We were boardin' a trader ship, pistols blastin' and swords swingin' this way and that. In the fracas me hand got chopped off."

"Zounds!" remarked the sailor. "And how came ye by the eye patch"?

"A seagull droppin' fell into me eye", answered the pirate.

"You lost your eye to a seagull dropping?" the sailor asked incredulously.