My uncle Charlie is the undoubted expert on budget boating.

He didn't gain his expertise at any university but from a lifetime's experience.

While the rest of us worry about the financial crisis, for Uncle Charlie, whose personal finances have always been in a state of collapse, it spells opportunity.

Unfortunately I can't mention all of Uncle Charlie's economic tactics, for legal reasons but there is a much we all can learn from him.

"There's nothing like messing about in boats for forming character." According to Uncle Charlie.

Though there are those who reckon that Uncle Charlie's character is more in need of re-forming.

Charlie's budget boating began with a classic dinghy which he and his two school pals rescued from the mud of the local creek.

Their safety equipment consisted of three galvanised buckets and a pump with a very shiny handle.

He later realised that one of the secrets to budget boating was to sail on other peoples boats.

So he joined the local yacht club.

In addition to the fun and excitement of sailing, the teenage Charlie became aware of its potential for creating different lifestyle options.

Through sailing he began to create new friendships, sailors often form a strong camaraderie around their activity and besides the club bar sold cheap beer.

And then there was Gladys.

For many, boating is a means of escape from the problems of life, a way to renew their creativity and maintain a fresh perspective.

For Uncle Charlie and Gladys it was more a means of escape from her father's tight lipped reproving glower.

"There is nothing as satisfying as saving a lovely old sailboat to sail another day." Slurred Charlie, to his pals on his stag night down at the yacht club.

But his 'ultimate sacrifice' might also have had something to do with the imminent arrival of a new crew member, Cousin Doris.

After attending Doris' birth he was heard to say, "This learning to sail can be bloody scary at times."

But as he and Auntie Gladys are still together after all these years and several additions to the crew I guess he would also admit that budget boating can be pretty rewarding as well.

Keep it Small and Simple.

The secret to budget boating according to Uncle Charlie is to; "Keep it simple and keep it small, boyo, just like your Auntie Gladys." He would say, having a quick look around to make sure auntie Gladys wasn't listening.

Not that there was anything small or simple about Auntie Gladys, she wasn't very tall but she was quite beamy. And there was nothing simple about the way she controlled the purse strings.

"The cost of maintaining and mooring your boat will grow exponentially with the size of the boat." He'd explain.

"And you can have an awful lot o'fun on a little boat, it just take a bit of organising."

In later years when Charlie and Gladys had produced their full 'crew' early morning strollers would stop to admire their 25 ft wooden cruiser tied up to the harbor wall.

Then be amused as first Uncle Charlie would appear, closely followed by Ulysses, a large, hairy dog of dubious pedigree.

The dog would be put ashore go lolloping off like a hare with his ears flung back screech to a halt by an interesting bollard, sniff, pee, bound back stop sniff pee again.

Then Auntie Gladys would emerge, beneath one of her big hats looking like a bag full of scatter cushions in her 'going ashore dress'.

She would then begin her morning make up ritual just as Ulysses flopped back on board causing her to spend the day with one eyebrow penciled in a quizzical arch.

Ulysses would be chased forward, to make room and help trim the boat as Cousin Kevin the twins, Nancy and Peggy and a sleepy eyed teenage cousin Doris appeared from below.

Then all would arrange themselves around the cockpit chattering like starlings on a telegraph line.

Budget Boating in a Recession.

Being a great one for a bargain Uncle Charlie loves recessions.

By the middle of any down turn in the economy their back yard would have a couple of 'classic' bargains awaiting 'restoration' before the upturn brought in eager buyers.

It was rare that any of his 'bargains' had ever been advertised for sale, they were usually 'discovered' through networking, uncle Charlie could still teach Twitter a thing or two about that.

And there was the added befit that most of his 'networking' could be done at the yacht club bar.

Being a traditionalist Charlie's 'restorationâ' usually entailed liberal coatings of tar and cement, canvas and paint, lead tingles and the judicious application of Auntie Gladys' hand soap to any suspect seams.

Mind you his love of a bargain could be off set by the opportunities that the good times allowed him to exercise his thespian talents.

"Ah, proper little classic this," He would declaim to his audience of dewy eyed, would be ocean wanderers dreaming of tropical islands.

"Can't bear to part with her. She was built to take you anywhere," He'd confide with a hint of moisture in his eye, and taking care not to slap her 20ft sheer too hard.

I bought my own first little cruiser from Uncle Charlie.

"Special price just for you lad, wouldn't let her go to just anybody."

No, anybody else would have sued after launching her in a frothy wake which smelt strangely like Auntie Gladys' bathroom.

"Budget boating is all about planning." He was wont to observe.

He was a great on for making plans was Uncle Charlie.

"You gotta plan your maintenance program for the winter so you can get the most fun out o' her during the summer.

And never pay anyone else to look after your boat, if you do it yourself at least you know what's been done."

Something I'm always quick to remind him of every time he has offered to work on my boats.

He has even been known to set to work on several five year plans.

Unfortunately, Uncle Charlie's plans, usually written on beer mats tended to get lost so most of the winter would be taken up with drawing up and modifying new plans.

But somehow he was always back on the water by spring.

They usually had oversized masts, booms, chain-plates and the like. And lots of sails of various size, shape and vintage all acquired piecemeal.

The winter is also the time when Uncle Charlie begins planning the next season's cruises.

"Right next year we are going to do that Atlantic crossing" He'd claim getting out the charts.

Eventually though, the master plan would have to be modified to allow for at least two trips ashore per day for Ulysses to have a sniff etc.

And it would have to take in a beach or two so the twins could play in the sand.

Navigation was made trickier by Cousin Doris' precious development and skimpy bikinis.

Sailing anywhere close to the dinghy course could play havoc with the boy's handicaps.

On the other hand it did mean plenty of willing hands when it came to tying up.

Budget Boating with a Family.

"Budget boating is all about involving the family, especially when it comes to winter maintenance." According to Uncle Charlie. 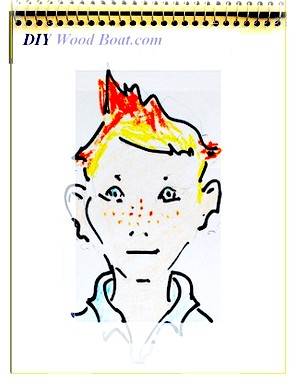 "They're never too young to use a paint brush." He'd growl.

No one was quite sure how Cousin Kevin got that orange deck paint in his hair.

But his school pals hailed him as being the first punk in his class when he turned up one spring with a bright stripe.

Involving his family into his budget boating plans was why he renamed their best loved boat Panope.

She had previously been called "Paradise Regained" by an owner who had bought her as a refuge from his wife.

Unfortunately he'd had to sell her as part of the divorce settlement.

Panope was one of the Nereids, the sea nymphs of Greek mythology, and according to legend they were often accompanied by Poseidon.

While Uncle Chaelie didn't openly liken himself to Poseidon he did refer to his 'crew' as the Nereids, even cousin Kevin with his punk hair and sticky out ears.

And as for Holidays, the family did once try an alternative to budget boating by taking a budget a package holiday.

But by the end of two weeks stuck on a crowded beach all agreed that budget boating was more fun.

Even Doris had to admit that emptying the porta poty was preferable to sitting in an airport lounge for hours awaiting a delayed flight.

Even as I write there is another generation of Nereids being introduced to the joys of budget boating by 'Granddad' Charlie.

"Sailors, with their built in sense of order, service and discipline, should really be running the world."
(Nicholas Monsarrat)