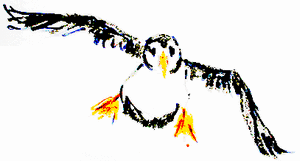 A wind vane self steering system is not an essential piece of equipment on a sail boat.

However, for anyone who sails alone or cruises short handed over long distances the benefits can be immeasurable.

Long tricks at the helm are exhausting, concentration wanes, essentials such as eating, trimming sails, navigating, sleeping etc are neglected.

Besides that, with a self-steering system set and the sails trimmed you will have time to relax and really enjoy the ride.

The first time that a wind vane was used to cross an ocean it was on a motorboat, or so I'm told.

Today however, electronic auto pilots are much more reliable at holding a course and the power to drive them is not an issue as most engines are fitted with alternators which constantly produce electricity.

However, a wind vane gear is best solution for a sailing boat and not just because of the power issue.

Wind direction offshore tends to remain relatively constant over long periods, but there are always constant minor variations and gusts.

In order to keep the sails drawing at maximum efficiency, while maintaining a set autopilot course, they would have to be constantly trimmed.

Wind vanes on the other hand will slavishly follow any wind shifts, a good one will often do it better than most humans and do it for hour after hour without tiring.

As well as not requiring any battery power, the windvane does not have any complex electronics which, will be vulnerable to damp and that are unlikely to be repairable without spare parts.

Many of the simpler vane gears can usually be repaired or rebuilt using non-specific parts and lashings.

And you can even build one by yourself. 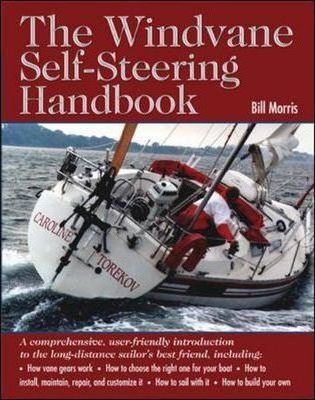 to Search for books on Self Steering from an Independent Book Shop Near You.

Prior to the development of windvanes long distance sailors such as Joshua Slokum and Eric and Susan Hiscock relied on their boat’s natural ability to bold a course.

Others used systems of blocks and lines between the sails and the tiller.

One of the most common used setups for downwind sailing was using poled out twin headsails, with the sheets lead back to the tiller so that when the pull on one sail increased, the tug on the tiller would bring the boat back on course.

These methods required the sails to be set for balance rather than speed, which is fine for the cruising sailor.

However, the increased interest in long distance short handed racing prompted the development of vane gears.

In the first Singlehanded Transatlantic Race in 1960 all five entrants used vane gear. 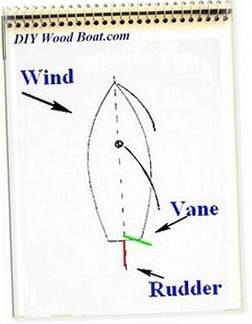 The whole point of a wind vane steering gear is to provide feedback to the rudder so that the boat can remain at a set angle to the wind, 'in the groove'.

So how does it work?

There are numerous variations to the mechanics of the linkages types of vane etc but they all work on the same basic principle.

The vane is set so that it is feathering when the boat is in her groove. 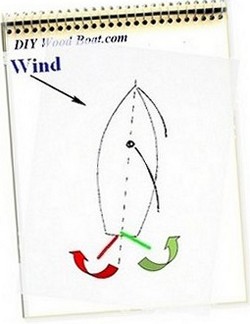 Any variation to this angle to the wind will cause the vane to rotate.

The linkages then transmit this rotation to the rudder in such a way as to bring the boat back on the desired heading.

With the boat back on its correct heading the vane and thus the rudder will return to its original position.

In theory the vane could be mounted anywhere where the wind across it is unobstructed.

However it has somehow to be connected to the rudder by some form of mechanical linkage, so the most logical position for it is on the transom.

And it is the linkage which performs the magic.

When the boat drifts off the wind the vane will rotate or flip with the wind, this movement then must be transmitted to the rudder as a turn in the opposite direction.

In the case of a simple vertically rotating vane, as the boat turns clockwise away from the wind direction the vane will rotate in and anti clockwise direction relative to the boat.

This rotation then needs to be transmitted to the rudder to turn it clockwise, relative to the boat, this will then turn the boat anti clockwise until she is back in the groove.

Once set up a vane gear can be very effective.

Setting up is however a matter of getting the balance correct.

Like your sails the wind vane needs to be set according to the apparent wind, the sails rudder and vane need to be in balance.

Because the vane is subject to the apparent wind it will be less effective on a run and in light airs.

In the very simplest of self steering vane gears as the vane pivots the movement is transmitted via lines directly to the tiller.

On others the vane acts directly on a secondary rudder.

However the force provided by a wind vane alone is rarely sufficient to make this system work with large boats.

To overcome this, variations such as the servo pendulum system, invented by "Blondie" Hasler have become widespread.

These systems harness the power derived from the motion of the boat through the water to help turn the rudder.

This is without doubt the easiest wind vane self-steering device to understand and build.

The vane is vertically pivoted and controls a trim tab on the rudder.

This can be either the main rudder or an auxiliary one.

I had this type of gear on my previous boat and it took me far and wide.

It isn't the most accurate of gears however with some judicious use of bungee to dampen any tendency to yaw it served me well.

Not only is it simple to build and operate but its very simplicity gives it an uncomplicated elegance.

When I built the new rudder for Mignonne I designed it so as to incorporate the vane gear.

This horizontal vane gear also operates on a trim tab.

However the vertical vane is set by turning it on its turret until the vane stands as nearly vertical as possible.

Because it tilts proportionally to strength as well as direction of the wind it is a more powerful version of the vertical-vane.

And there is less tendency for the boat to yaw.

On the vertical-vane servo-pendulum invented by Blondie Hasler, the vertical wind vane is connected to the servo blade.

As the pendulum, or servo blade, is turned by the vane it is forced aside by the its movement through the water.

It is this force which is then transferred to the tiller or wheel by means of the linkage.

The main advantages are that the stronger the wind, the faster the boat speed, the greater is the force is applied to the rudder.

The servo-pendulum with a vertical wind vane has become the standard for most commercially produced wind vane systems.

While there are differences in their methods of transmission, the basic principle is the same.

The most popular among cruising sailors is the Monitor because of its rugged construction and because most parts can be fabricated and repaired relatively easily.

While these commercially produced systems are robust, perform silently and very near flawlessly on all points of sail, they are very expensive.

Building Your Own Vane. 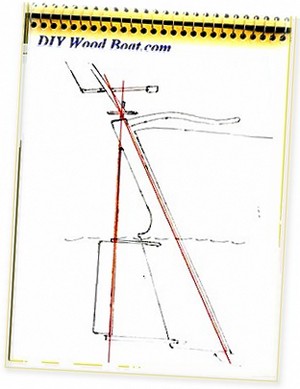 The easiest and least expensive type of boat to fit a wind vane to is one like Mignonne which has a transom-hung rudder and tiller.

This uses the vane to control a small trim tab on the trailing edge of the main rudder.

The trim-tap controls the main rudder in the same way a trim-tab works on an aeroplane wing.

As the tab turns in concert with the vane, the rudder is deflected in the opposite direction thus turning the boat.

If you are designing your own vane, whatever the style there are several details to keep in mind.

The vane I have used on Mignonne was inspired by an idea from one of Lin and Larry Pardey’s books.

Rather than use the usual plywood panel I made a wooden frame to support a sailcloth vane.

My vane like the rest of the boat is still very much a work in progress and the present vane really needs to be larger, I knocked it together from off cuts and leftover bit of sailcloth.

However, creating it to look like a small mizzen sail has the added advantage of fitting it into the overall look of the boat.

Also the light weight needs less of a counterbalance.

My main fear from using a trim-tab was how it would be affected when motoring astern. 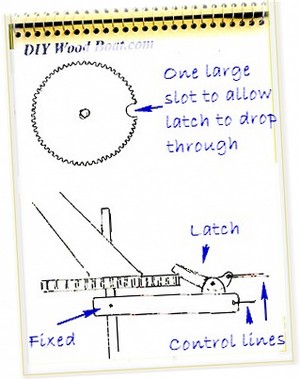 The usual advice is to have a locking device to center the tab, but I know from experience how easy it is to forget something like that until it is too late.

So what I have done is attack the tab with enough clearance between it and the trailing edge of the rudder to allow it to rotate through 360 degrees.

This type of trim-tab also seems to work best where there is an angle between the axis of the rudder and tab pivots and if the linkage is sited where these cross.

Because the trim-tab turns in the same direction as the vane the linkage is direct.

The only provision needed is a method of allowing the vane to be set according to the wind direction.

I used a disc of a Tufnol like material which was relatively easy to shape yet is hard wearing, I have heard of someone who used a bicycle drive cog to good effect.

The latch is just a piece of metal hinged so that its own weight causes it to engage and it is controlled with a simple lanyard.

My greatest fear about using the wind vane is if I should fall overboard and have to watch my boat merrily sailing away form me.

OK, that can happen without self steering which is why I always (well nearly always) clip on when I'm sailing alone.

I have read suggestions about trailing a long line with a float on the end, umm, that’s ok if you are able to swim to it in time to catch it, I’ll stick to my harness and safety-line thanks.

And remember that while a wind vane might do a great job of helming your boat it won't keep a lookout, that’s still your responsibility.

However, I have found that being relieved of the need to helm allows me more time to look around.

And on the subject of looking around don’t forget that extra bit of gear sticking out of the transom when docking mooring and going astern.

Also remember that your vane can only react after the boat has moved off course, it isn’t able to anticipate the sea conditions or wind shifts.

If you do need to make an emergency course change the wind vane mechanism should be easy to disengage.

Self Steering Gear
Hello, I have one question concerning self steering gear presented in the attached picture (copied from your site). I cannot understand the reason …

QME self steering
I have a QME wind vane self steering gear which I bought second hand on ebay. It did not come with any instructions , so I set it up as I thought best …