Strong, stable woodworking joints are required whatever type of Wooden Boat building you embark on.

Here are some of the joints most commonly used in boat building from traditional to stitch and glue.

Most of the bonding methods used in boat construction have evolved over many years.

However, modern adhesives have made gluing timber much simpler and stronger.

This has revolutionised home boat construction, bringing it within the scope of the average handyman.

The development of epoxy resins has led to new and greatly simplified construction methods.

A Butt joint supported by a butt block is the simplest method of joining planks.

On traditional carvel construction these are mechanical bonds rather than glued.

These are normally used to create long planks from shorter lengths of stock. 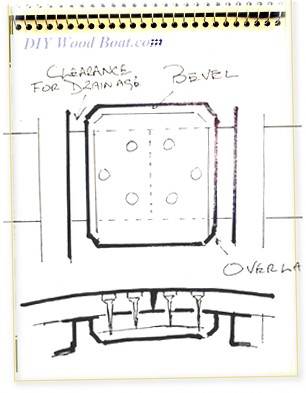 To be effective, the butt blocks should overlap the planks above and below by between ¼ to ½ of an inch, 6 to 12mm.

The blocks normally are of the same timber as the planking. However, it is not unusual to use a stronger wood and /or thicker stock.

It is quite acceptable to use wood screws to fasten a hardwood block.

With softwood it is best to use through-bolts.

A gap of at least ¼ of an inch, 6mm should be allowed between the block and adjacent frames to allow for drainage.

It is equally important to bevel the top edge of the block to stop moisture being channeled towards the back of the block.

The back of the block should be shaped to fit the compound cure of the planking.

Prime the butt and underlying plank before fitting with a bedding compound.

Caulk the exterior of the butt. 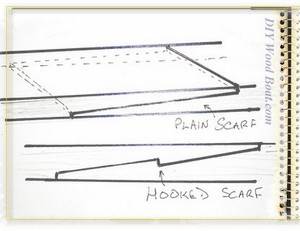 This is the method to use when gluing timber to make longer lengths.

It is also an economical method which, can be used to make shaped pieces from available stock.

The point of the long scarf (or scarph) is to increase the strength of the joint by increasing the glued surface.

The length of the scarf should be in the ratio of at least 8:1 in relation to the thickness of the plank.The preferred ratio is 12:1 however that will depend on the application.

The faces of the scarf will need to be close fitting to facilitate gluing.There are simple jigs which can be made to ensure close mating.

The simplest scarf is feather ended however the ends are prone to damage.To overcome this it is normal to nib at least one end. 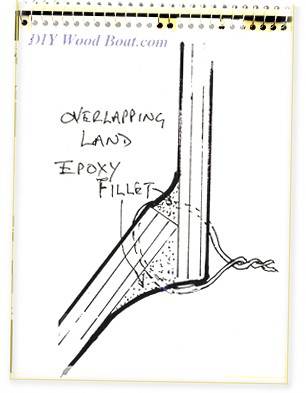 Stitch and Glue Joints make use of thickened Epoxy Resin to create fillets.

These make boat building simple without having to become a highly skilled woodworker.

The sections are initially held together with the wire ‘stitches’.

Fillets should be roughly 1.5 times the thickness of the plank. 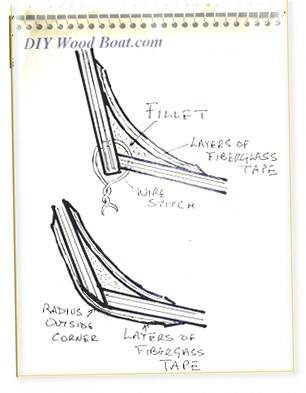 Once the fillets have cued epoxy saturated tape is laid over them with a good overlap.

To remove the wire heat it until the epoxy surrounding it softens. It can then be pulled out quite easily.

With the wire removed radius the outside corner. 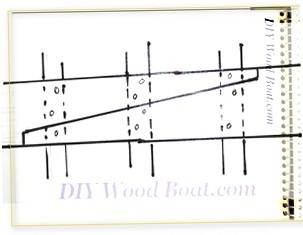 This is an alternative to using butt blocks where it is difficult to fit a block behind the planks.

The scarf is spread over several frames to give it sufficient strength.

This is a mechanical joint, which should be caulked.