A sacrificial worm shoe is a non-structural piece of wood, fixed to the underside of a wooden boat.

One of the great advantages of a traditionally built wooden boat is that damaged parts can be replaced.

Unfortunately those underwater parts which are most likely to be damaged by a grounding are the most difficult to replace, hence the worm-shoe.

So why is it called a Worm Shoe?

Of all the words in the sailor’s lexicon the one which is guaranteed to put the fear of god into the wooden boat owner is ‘Teredo’.

Though the teredo is not a worm at all but a bivalve mollusc, it is only one of many hungry little vegetarian creatures which love nothing better than a good old munch on your boats timbers and not all of them live in tropical waters.

It only takes a pinhead sized hole in your boats protective paint/anti-fouling for them to get into her timber.

Once in they can munch their way along the grain until the wood is as fragile as paper.

The slightest gouge exposing end grain is akin to opening a free canteen for borers.

And you don’t need to smash into coral or rock, the vast majority of the sea bed is made up of very abrasive stuff.

Even the lightest brush over sand or shell will rub off the anti-fouling.

So the point of the sacrificial shoe is to have an easily replaceable piece which will take the damage and keep the ‘worms’ occupied and out of the main structural timbers.

Normally the shoe is placed under the lowest sections of wood where groundings are most likely to cause damage.

This is usually the after end of the keel at the base of the stern post and under the deadwood.

On a typical keel boat this is the spot most likely to hit bottom in shallow water. 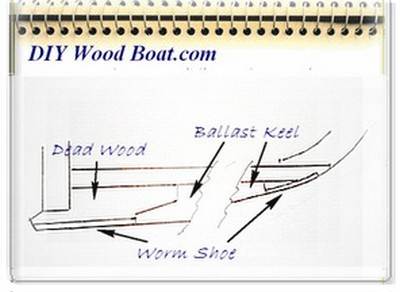 However, there is no reason why the 'shoe' should not also be added to the front end to protect the stem.

And a sacrificial strip of wood is perfect for protecting any vulnerable sheathing like epoxy and fiberglass.

The 'shoe' does not have to be of the same wood species as the original keel.

However, it should be reasonably rot resistant and strong enough to absorb some of the damage caused by grounding.

As it is a sacrificial piece it also needs to be relatively easy to replace, so screw fastenings and definitely no glue.

The screws will need to be well countersunk to prevent damage and the heads well protected with bungs or filler so they remain in reasonable condition for when it is time to unscrew them.

The next important provision is creating a worm proof barrier between the worm shoe and the wood it protects.

The last thing you want is for the worms to progress from the 'sacrificial shoe starter' to a 'main course of keel'.

A layer of bedding such as ‘Irish felt’ or tarred roofing felt between the worm shoe and the deadwood should keep the little darlings where they belong, and allow for easy removal when the shoe needs replacing.

Now while we don’t mind if worms getting into the shoe it is still better if they can be kept totally at bay.

The sacrificial worm shoe unlike a sacrificial anode doesn’t cease to protect if it is painted.

So feel free to give the 'shoe' the same protection as the rest of the boat, plenty of creosote, paint or anti-fouling.

And don’t forget to check and if necessary replace it at haul out time.

Worm Shoe???
I need to replace the worm shoe on mu cruiser, but what is the purpose of a wormshoe in the first place? If it is to protect the keel from burrowing …