Port lights, deck hardware and other topside applications need to be mounted with a waterproof seal.

Perhaps the most commonly used sealant these days are the one part polysulphides but butyl is also popular.

Whatever sealing compound is used there are a few tips and precautions that will make for a better and longer lasting job.

While we don't want the bedding compound to 'glue' the components down we do want the sealant to 'stick' to them and to whatever they are being on.

So, all surfaces need to be as clean as if one was gluing.

Most new metal fitting will have traces of oil grease and protective coatings, and that also goes for the bolts and screws.

Clean all the mating surfaces including the heads of the bolts and screws.

When reseating or replacing any components remove all traces of the old bedding compound.

The old stuff might be well stuck on but is it clean and will it be compatible with the new stuff.

Prepare the mating surfaces as you would if you were going to paint them, clean, degrease and a quick rub with sandpaper of wire-wool.

Countersink the drill holes in the wood slightly.

A small amount of countersinking will not only remove any rough edges but will also create a small cavity that can be filled with sealant.

So even if the rest of the sealant is squeezed out when the fastener is tightened down there will be a ring of it around the top of the fastener, just where it is most wanted.

And as you tighten down the sealant will be forced down that 'funnel', into that hole through the wood that is what we really want sealing

It doesn't need to be a deep countersink.

Another benefit is that the fitting can be tightened right down straight away without having to wait for the sealant to begin to cure. 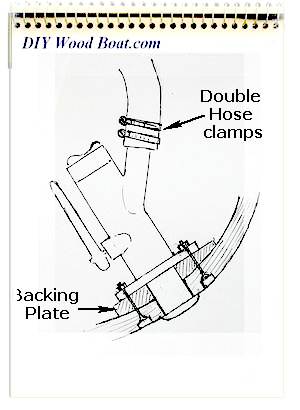 The majority of fitting require a backing plate in order to spread the loads from the fastenings across as much of the supporting structure as posssible.

Fittings that are likely to be heavily loaded will benefit from having a 'backing plate' on the top of the deck as well as underneath.

Stanchions supporting 'guard rails' are particularly prone to tremendous strain because of the leverage mooring cleats can also at time be heavily loaded.

Backing plates should be shaped to fit snugly to the underside of the structure so it has a nice even contact with the surface it clamps to.

Where it is difficult to judge the shaping, the plate could be laminated in situ from thinner material.

It is also worth using larger heavier washers than the standard washers for the particular size of bolt.

Don't bed the inside of the backing plate with sealant, only seal on the outside.

If there any leaks you don't want the water being trapped within the wood.

I like to use plenty of bedding compound so that it squeezes out around the edges and is forced down that countersink.

Masking tape around the fastening before tightening it down will help with clean up.

Even though sealant in the countersink will seal the fastening it is still a good idea to turn the fastener around a bit to get the bedding compound into the threads.

I believe in tightening the fastening down to start with.

I prefer to have the fitting tightened down onto the wood with the sealant simply sealing the joint and the edges.

I don't want a 'washer' of sealant curing between the fitting and the wood before a final tightening down.

If I wanted a 'washer' in between I'd use something more substantial then cured sealant.

However, I do like to give the fitting a final tweak once the sealant has cured.

Apparently some boat manufactures are beginning to use it too.

Butyl Sealant has many excellent properties one is that it will stick to almost any substrate and is very easy to fit and apply.

It is very flexible and stretchy and while the bond strength is low is has sufficient adhesion to cling adequately to the fitting and the deck.

But the main advantage for us boaters is that it doesn't cure, it retains its same thick consistency for a long time.

And because it never hardens you can keep a roll handy in your tool box for years when that tube of polysulphide would have gone off.

So it has to be perfect for bedding or re-seating that occasional small deck component.

The disadvantage is that unlike the polysulphides it doesn't cure so it won't hold a finish.

And it can be a bit messy if too much is allowed to squeeze out but it can be cleaned up easily with mineral spirits and a rag.

But because butyl can be softened with mineral spirits it is best not to use it on fuel fillers or vents.

While butyl tape is stretchy, it is also fairly dense so it does need a bit of time for it to squeeze out and get into every nook and cranny.

But as there is no danger of it curing, the tightening process can be done in stages, allowing it time to spread.

Now I've got to admit that my own experience of using the tape is recent and limited.

And my main reason for trying it was one of economics, having something in my tool box that would remain useable for those occasional small jobs.

The type I have is the black stuff sold in RV stores and while it appears to be doing the job, apparently it is not as durable as some other types.

Since buying it I have been told that there is a gray colored variety that is better.

If anyone has more extensive experience of using butyl as a bedding compound I'd love to hear about and pass on your observations.

Your Comments
I've seen butyl used in the past without good results. Trying to clean it is also a major nuisance. Depending on the substrate that you're bedding …