There are numerous whipping methods most use twine tightly wrapped many times around the rope close to its end.

With many of the modern synthetic ropes you can simply melt together the ends to prevent them fraying.

The ends can also be taped, however tape can soon becomes ragged, breaks and then allows the rope to fray.

PVC tape is fine just for wrapping around the rope to contain the strands prior to cutting it.


However, a whipped-end is not only the best looking way to finish a rope end but if done properly it will outlast other methods.

A common whip is fine in most cases but for lines which require a more secure, longer lasting end the sailmaker’s whip is more robust.

Of the several methods used for binding a line end, the easiest to do is the common whip. 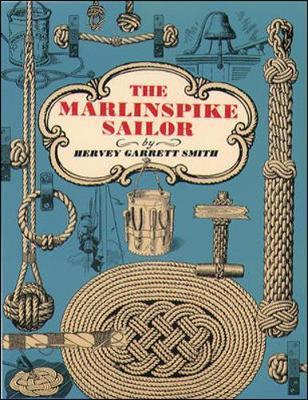 to Search for books on Rope Work from an Independent Book Shop Near You.

This doesn't require any tools and can be used with either three-strand or braided line, but it does have the disadvantage that if handled often it can become loose and slip off.


The video below will probably give you a better idea of the process.

However, the basic steps are to start with a loop of the twine that is at least twice as long as the diameter of the rope.


Lay the loop along the rope with the loop toward the bitter end of the rope and the short end extending down the length of rope (standing end).

Begin wrapping the twine around both the rope and the bight in the twine, starting from the base of the loop, leaving the end of the loop showing.

Pull each turn tight and snug as you go along.

Keep winding until close to the end of the loop.


Cut the twine with then slip the end through the loop.

Now if you pull on the short end of the loop this should pull the cut end of the twine through under the windings.


Finish off with a buried reef knot.


You can finish with several reef knots or half hitches then pull these through the rope or under the bindings with a needle so that they are neatly buried.


Trim the line close to the whip and if using synthetic rope melt the end as well.

The Sailmaker's-Whip is more secure because it is ‘sewn’ into, rather than just wound onto, the rope.


Again, there are many different variations on this basic theme.


Essentially, the binding turns are held in place by frapping turns which both grip the rope and prevent the whipping from unwinding.

This method can be used on braided as well as three stranded rope.


It is possible do a sailmaker's whipping on three stranded rope with out a needle by opening the strands to pass the twine around them.


However, a large sailmaker’s needle will make the job easier.


I prefer to use my ‘Speedy Stitcher’, the large wooden handle makes it so much easier to handle and apply leverage.


With three strand rope it is easy to decide where to lay the frapping turns, along the groove between the rope strands.

On smaller braided ropes just two sets of frapping turns on opposite sides is quite acceptable.


With three strand rope begin by separating the strands of the rope for approximately twice the rope diameter.


Form a loop in the whipcord then pass this over one of the rope strands.


The short end of the twine should then be wound inside the windings along the groove between the rope strands.

When you have sufficient windings use either a fid to lift the strand of the rope or the ‘Speedy Stitcher’ to reeve the twine under the rope strand.

Use the fid or ‘Speedy Stitcher’ to reeve the ends of the twine behind the next strand to the left at the other end of the whipping.


When you have done all three strands bring the tail of the twine to the end of the rope.


Finally tie a reef knot or two using the tail and working ends of the twine.


Then knots are pulled through the rope to bury the ends.


Use the same technique with braded line except that you won’t be able to separate strands with a fid but will have to use a needle to ‘sew’ the frapping turns.


With braded rope you won’t have the twist of the strands as a guide so you will have to be careful to keep the frapping turns equal.


Trim the strands of the rope close to the whipping.


It is still a good idea to melt the ends of synthetic rope as an additional precaution.


The sailmaker’s-whip takes a little more time and practice to master, however it is well worth the extra effort.


Not only is it more secure but it looks more ship shape.

This is not strictly speaking a whipping but merely a series of overhand knots finished off with a reef knot.


It is not particularly secure but it is quick and easy to learn and will hold until the end is properly finished off with a better method.


Start with a ‘constrictor knot’, then working away from the bitter end tie a series of overhand knots and finish with a reef knot or two, which can be pulled through the rope to bury it using a needle.

Splicing is a very ancient art, which done neatly creates a beautiful effect. 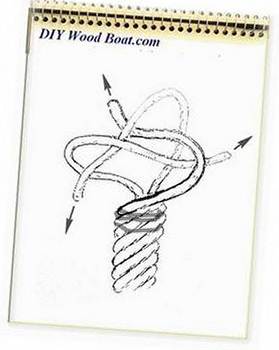 A back splice at the end of a three strand rope is very secure and seamanlike.


One possible drawback is that a splice does increase the diameter of the rope end, which will make it difficult to feed through blocks and such like.


The back splice is started by separating the strands and then making a ‘crown’ to redirect the strands back towards the standing end.


The strands are then braided into the standing strands for at least three complete ‘tucks’.


The back splice looks splendid on mooring lines but for other lines which may need to go through blocks a whipping is preferable.

"Prevention is, as in other aspects of seamanship, better than cure"
(Sir Robin Knox-Johnston)