Legend has it, that using blocks and tackle, the defenders of Syracuse in 213 BC, were able to lift entire roman quinqueremes, complete with crew.

Archimedes just happened to live in Syracuse during the Second Punic War.

The city walls rose sheer out of the sea, so the attacking Romans were able to sail their warships right to their foot.

The Syracuse defenders were then, we are told, able to drop grappling irons, hook them on to the Roman ships and using an arrangement of blocks and tackle, designed by Archimedes were able to lift them out of the water tipping out the crew.

How well this worked in practice is debatable but the theory was sound.

And the Roman fleet was, so we are told, well and truly trounced.

The basic idea of the block is to alter the direction, in which the rope is being hauled.

The sheave is simply a wheel, with a grooved rim to guide the rope which, allows this change of direction, with the least amount of friction. 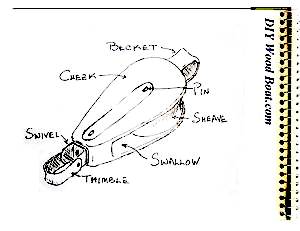 In the traditional block the sheave was mounted in a wooden frame.

Modern blocks use modern materials not only for the sheave but also for the framework which results in a much neater arrangement.

There are numerous types of blocks available.

Some are used simply to change the running direction of a line such as turn blocks and cheek blocks.

Others are used to increase mechanical advantage.

The majority have one, two or three sheaves arranged side by side.

Some have two sheaves in line, a main sheave and a smaller one called the fiddle.

The basic principle of the block hasn't changed since Archimedes' time but modern block makers have put a lot of thought and effort into improving their effectiveness.

The more expensive blocks will have ball races to reduce friction.

Many will have swivels on the beckets to help reduce tangling of lines.

And some will have jammers, ratchets and snap shackles.

There are also snatch blocks which, have one cheek which opens so they can be put on to a fixed line, rather than having to feed the line through. 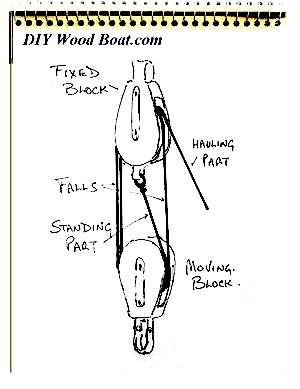 The tackle is just the name given to an assembly of blocks and lines.

There are two types of blocks and tackle, simple and compound.

A simple tackle system is one where only a single line is used.

A compound tackle will have more than one line reeved.

The standing part of the line is the end of the fall, which is attached to one of the beckets.

Falls are the parts of the line stretching between the blocks.

The hauling part is the end of the line, leading from one of the blocks upon which the pull is exerted.

The standing block is the one attached to a fixed object or support.

The moving block is the one which is fastened to the object to be moved.

The mechanical advantage, if one ignores the effect of friction, is simply equal to the number of falls pulling on the load.

So, a tackle which has four falls will have a mechanical advantage of 4.

This means that a 100 lbs weight can be lifted by exerting only 25 lbs of force on the hauling part.

The mechanical advantage or purchase of a tackle will, in theory increase by the number of sheaves in the blocks.

Unfortunately the more sheaves there are the more friction is generated. 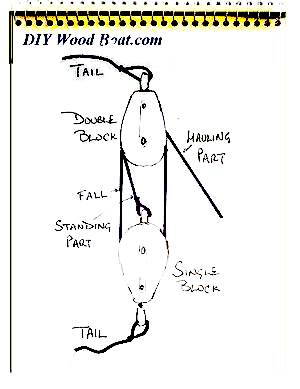 In most situations the hauling part will feed from the fixed block.

This is known as being rigged to 'disadvantage' because you will be hauling in the opposite direction to which the load is being moved.

With the hauling part feeding from the moving block, the blocks and tackle will be rigged to 'advantage' as the haul will be in the same direction as the load is moving.

While the mechanical advantage or purchase will be improved by rigging to 'advantage' this is not always convenient.

While it will make the work lighter, more sheaves will also mean having to pull a lot more rope through the blocks.

So setting up a system of blocks and tackle will have to be judged in light of the situation.

Having a simple Handy Billy on board however, is always worth while for the extra purchase it can give.

As for the claim that Archimedes could lift a fully loaded warship with one hand using his blocks and tackle, I'll leave that to the historians to argue over.

Advantage Snafoos
I'm thinking...if the moving block is below the fixed block (which is mostly normal)...then- in order for the hauling part to travel same direction as …