Bumblebees can't fly. Or so says conventional theories on aerodynamics.

The junk rig won't sail, according to contemporary notions on laminar flow. 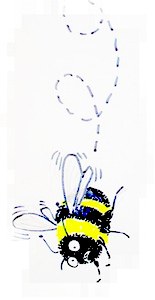 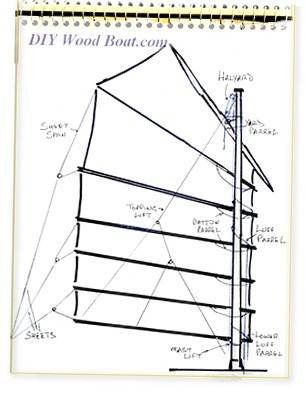 Yet the bumblebee does fly and junk rigged boats have been sailing perfectly well for hundreds of years.

Today, sailcloth is filled, so no air can pass through, yet many so called primitive craft have used open weave matting for sails with excellent results.

When I started to imagine how to rig Mignonne, I tried to keep conventional western 'scientific' ideas out of my mind.

I was determined to try to follow the original Chinese notions adapting them to my needs.

I liked the idea that flat batons would create camber through the sail not by bending but fanning in the horizontal.

Such a simple idea seemed much more in keeping with the original.

Today's obsession with bendy batons seems to me to be rather geeky and missing the point. Which is why my original plan was to go for a 'Reddish' type of rig.

I also wanted it to be a large low aspect sail.

Wishing to keep things low tec. and simple (just like me), I have used wooden batons.

Ash having one of the best strength for weight ratios was the obvious choice. Weight aloft was not regarded as a problem as it helps to dampen roll. 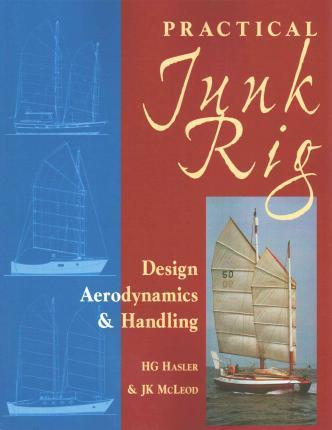 to Search for books on Junk Rigs from an Independent Book Shop Near You.

All batons except for the gaff are the same length and all are made from two by one inch stock.

The gaff and the next baton down have been made stronger by laminating them up from the same stock.

All other batons have been made from two lengths overlapped in the middle. That allowed me to buy the wood in lengths that I could transport on top of my car.

They were given a generous overlap and scarfed then glued and clamped. Copper rivets were added to reinforce the joints.

It also provides a reinforced center to each baton.

Making separate panels was my original intention as I had read an article in one of the Junk Rig Association magazines somewhere about the possibility that the junk sail used turbulent rather than laminar flow to gain lift.

Separate panels, would allow air to flow through and around the batons thus creating turbulence.

It was also important as it would make sewing the sail that much easier.


I was determined to do everything my self so as to be self-sufficient and independent.

I had managed to buy an old singer sewing machine right at the start of the project.

It took very little time to knock up the panels, once I had figured out how to use the machine (that was the hardest part).

I have since made a sail cover and a canopy to cover the main hatch and partly shade the cockpit. I also have several other sewing projects in mind, so the initial expense will be more than justified.

Initially my sewing was rather crude and the panels were not quite the correct shape, but I do have a working sail. Moreover, it did not cost me an arm and a leg, and it is one, which I can alter, and playing around with in the future.

I was also able to keep costs to a minimum by using the cloth from some old tan sails. There was enough good material to make half the panels.

In a fit of whimsy, I bought some contrasting yellow cloth for the other panels.

I had originally intended using cloth that did not have filler (non-sailcloth), as I still had the idea of turbulence and those crab claw matting sails in mind.

However, using the old sails prompted me to chicken out, so the yellow is filled sailcloth as well.

However, I've been able to use very lightweight cloth, as the unsupported area of each panel is quite small.

I paced eyelets every eighteen inches or so along the foot and head of each panel.

All are lashed on to the batons separately, using robands. Unfortunately, many lashings don't make for quick panel changes.

The original design called for a taller mast but as the one that I have used was available, free, I decided that it would do for the time being.

I could always install a taller one later if I felt it was needed. Moreover, there was always the option of increasing the sail area by extending the batons.

I have, so far, been pleasantly surprised at how well the sail handles.

However, I am still a novice at junk rig sailing, perhaps by the end of this next season I may wish to make some alterations. For now, she will do fine.

Remember, the secret of enjoying a slow boat is never to sail in company with a faster one.!