Marsude was purchased this time last year after looking at about ten boats with far less work to be done ... why I still ask myself.

Her hull is triple diagonal cedar, her decks marine ply and her cabin and cockpit identical to a Swanson of about the same length.

Her previous neglect was shocking ... she leaked from gunnel, cabin top, transom and bow.

Where do you start with a job like this. 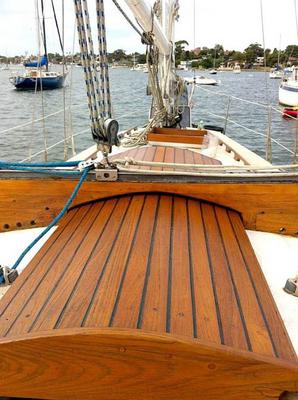 First thing was to repair and oil the companion way hatch cover ... just so we could see something in finished condition ... if you like this was just t encourage us with the long list of tasks ahead of us.

Next we slippped her and removed 40 plus years of anti-foul and fixed a few suspicious looking spots ... replaced through hull fittings.

At the same time the steel beams were being welded together to replace the rusted out steel ones (joining at keelson).

Why they put steel in I have no idea ... a beautiful hull with steel? just doesn't compute …

This photo shows damage that is repeated right along the bilge. 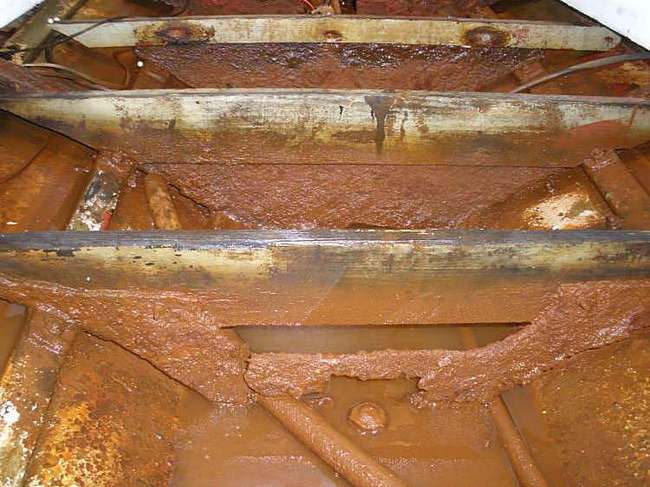 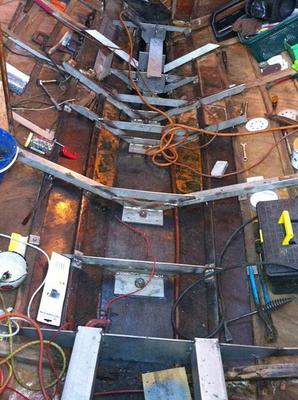 After learning to weld stainless steel, it now looks like this.

While this was all happening (on the mooring) ... days too wet to work on board, the yanmar engine got rebuilt in the garage at home.

When we purchased Marsude the previous owner told us that it was reconditioned ... he was wrong ... it was painted only.

It was taken apart , re bored, honed and put back together fully serviced and new gaskets and seals everywhere...

The mounts in Marsude are also now ready for their engine ... It will be a big day when it starts ...

There was significant rot on the transom ... the knees were replaced and re-laminated with cedar, the transom was repaired and then cedar boards horizontally and then the new deck went back on ... three layers of ply and then it was to learn to do a bit of fibre glassing

Then after digging out the rot from deck and transom we relaid ply on the decka nd cedar strips on the transom.

This has now been sanded and fibreglassed, first time at this and everything else ... vast learning curve :-)

Today it is raining heavily with strong winds ...

I purchased some gear from an online chandelier in the US a couple of years back winches, jammers, warp etc...

Much cheaper than in Australia.

But I have lost contact details ...if anyone knows of a good online store ... cheap and reliable, I would be very happy.

It's time for us to get a couple of self tailing winches, an anchor winch (electric this time round), jammers etc.and warp ...

We are now planning the standing and running rigging for Marsude and its time to get the rig organised.

Would really appreciate some information from the US cruisers :-) Today a colleague at work told me he had found our Blog about the restoration of Marsude ...

I realised I had not added to the Blog for several months ... so here we go again.

Over the past few months we have been away on holidays and work has been major to say the least ... but Marsude has progressed ...

The last few months have meant the completion of the transom repairs and last week the solar tower finally went back on ... well it was placed in position (no photos till finally in place) ...

This weekend and weather permitting the tower will be bolted and glued in place ... then it will be onto the bow ...


Well a few of the bolts were a wee bit short ... we knew there were a few somewhere ... was it at home or on the boat ... not on the boat ... better get a few more from the stainless guy on the way home ... then home to weld them to the right length etc. and guess what? that is when we found the bolts we had misplaced ...

Maybe tomorrow we will get the tower installed ...

Then DJ moves on to the next job (the bow) and I sand and prep and paint the transom ...

Meanwhile with some old rope I am going to make a thump mat to use as a door mat for when we step aboard ... for when Marsude is no longer a work site ... :-)

I made one for the last boat (Rampage) and it worked really well.

And on an extremely rainy day in June

We really don't like missing our weekends on Marsude.

Instead we went to Jaycar and Whitworths for fuses, tinned wire,crimpers and returned home to test some of our electronic equipment.

We weren't overly optimistic as Marsude had been underwater.

But the Autohelm 3000, the VHF and the Radar screen are all functional, at least on the back verandah.

We were going to be epoxy painting the rest of the bilge, so the floors can go back in.

Not sure how to fix them.

Also have a new circuit board sorted.

We are moving slowly toward re rigging.

Any ideas of where to get good yet as cheap as possible halyard and running rigging rope?

A few years ago getting winches from the USA saved us over a thousand.

by Lesley and Dennis
(Sydney Australia) It has been over a year since we last posted on this site.

Marsude has moved from Botany Bay to our driveway which was quite a job in itself, involving building a frame strong enough for her, a crane at each end of the journey and a low loader truck and trailer.

So now Marsude has been in our driveway for about 6 months.

The cars no longer fit and one is out on the street. 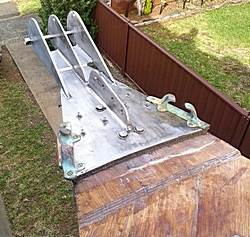 We moved her because it was too slow to work on her on the water.

Too much wind, rain meant no work and we could only work on her at weekends anyway.

Now even if it is raining there is always something that can be done out of the weather.

Our back entertaining/bbq area has become a workshop with two saw benches permanently set up etc etc.

The jobs done to date include removing the Bow sprit, anchor roller was removed and repaired and then replaced after the bow timber work had been made good. 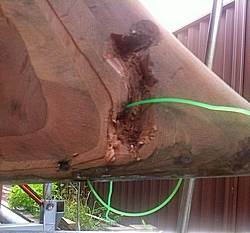 There was rot in the deck at the bow as well as the structural timbers underneath.

The bow topsides had had a nasty prang at some time in her history and after removing the bog and rot, Dennis laid three layers of cedar strips diagonally.

He dose this whenever there is bog or rot.

After repairing the bow deck, framing and topsides, all was fibreglassed and then the bow roller was reinstalled.

The forward bulkhead was moved forward by 10 cm. This means the v berth below will work for us. The framing for the berth was also dropped by about 10 cm to give better access.

After this job was completed, the foredeck was rebuilt.
Damaged diagonally laid ply was removed and replaced with new.
While doing this job we removed the forward hatch, and extended the foredeck to include the area that was the hatch.

With the transom done and the foredeck done, there remains only the port and starboard deck areas to do.

Once this is finished we will start on the cabin top. 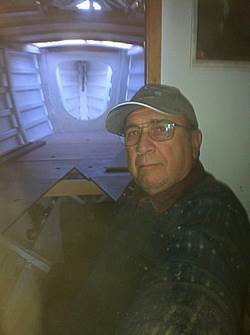 We are extending the cabin forward and situating the forward hatch on the cabin top instead of on the deck.
This will enable us to have better head room in the V berth and access to it.

We are also thinking of lifting the cabin top and enlarging the very small hatches along the sides.

Not sure of this as yet will wait to see how extending it goes.

I have not been working on Marsude very much at all, a bit of scraping, sanding and painting, but Dennis has been putting in huge hours and it is really showing ... a very exciting time to see this beautiful but extremely neglected vessel coming back to life.

by Lesley and Dennis
(Sydney Australia)

August is a very wet month this year and most days have been rainy for the last couple of weeks ...
The final third layer of ply was installed over the foredeck in between wet days though ...

Only have the port side deck to repair and the decks are ready to fibreglass ...

But now in the rain its under the waterline to remove damaged dynel and bog to rebuild and make good.

We have decided to remove all dynel and redo with fibreglass after making any repairs we find such as woodworm damage as found on rudder (see photo in previous post).