This adventure is about a wooden boat I fell in love with in the1970's and owned for almost 25 years.

"Shiloh" was built over a 7-year period and launched in 1963 in Peoria, IL by Porte Wheeler, a DIY builder of the boat.

But unfortunately, Porte passed soon after she was launched and never had the opportunity to enjoy his dream.

I first spotted "Shiloh" at dock behind a home on the Illinois River at Chillicothe Il.

My opportunity to buy her came some years later in April 1982 after she had sunk the previous February at her dock in Hamm's Harbor. 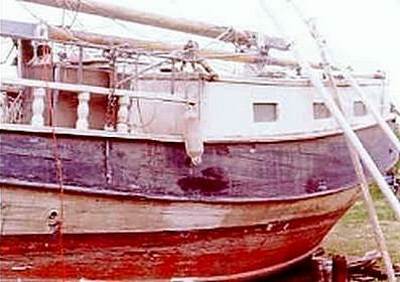 One of several sinkings I came to find out later.

I paid $4,000 for her which seemed like a lot except she had a new 30hp. Yanmar diesel for an auxiliary.

Also, I could always get my money back by salvaging the good stuff.

Instead, I spent the next 25 years restoring-rebuilding Shiloh from what you see in the picture taken in 1982 to the picture of Shiloh on her way to Kentucky Lake, Tennessee June, 2005.

Shiloh was towed from Hamm's down the river to Seaway marina, her home port, with the help of fellow sailors.

To the surprise of all, the move came off without incident.

Marine plywood was used under fiberglass for the decks and cabin top.

This combination made for a challenging restoration project.

In fact, it is because of this combination, the project became one of reconstruction and redesign.

A word about Shiloh's construction.

She is hard chined. 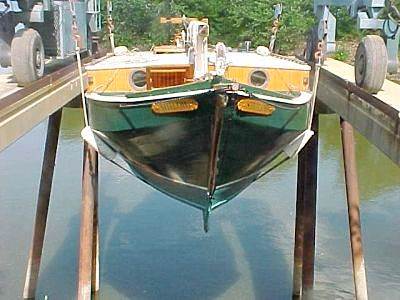 The keel, sampson posts, and mast tabernacles are hedgerow.

She drew less than 3 ft. at the barn door rudder when the center board was up, 6 ft. with it down.

Bottom planks were 11/4 in. fir fastened to white oak and hedgerow floors at a diagonal to the keel.

Frames are on approximate 12 in. centers.

With the help and encouragement of friends and others, here's what I did with Shiloh while in my care.

Making her seaworthy is a good place to start.

I took the hull to bare wood, ripped all the seams below the waterline (which included removing all the grit between the strip planks which was the main cause of her sinking), caulked and painted her.

Shiloh was put back in the water and sailing, never to sink again on my watch.

Speaking of seams, a friend of mine was down below tinkering with the engine when he called up to me on deck. “Hey, I see water through the planks down here! “Are the seams above or below the waterline?” I asked.

We weren't without our humor. Her seams above the water line were always open if it was dry until I did something about it.

Sycamore expands and contracts with the weather more than other woods.


Back to Top of Page
Or scroll on to Part 2 Over the course of time, "Shiloh’s" topside was completely redesigned and rebuilt using vertical grain fir for deck planks fore and aft after removing the fiberglass covering. 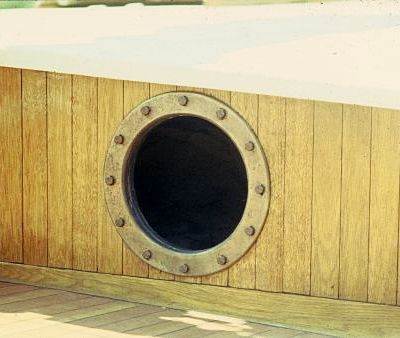 This included removing the 12 in. bronze port lights from the cabin top and relocating them in the new forward cabin side.

The cockpit was gutted and redesigned to provide for gunwale rails, seating and a mahogany drop leaf table which I built. 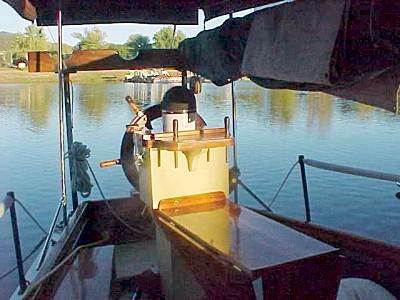 The new helm was built to accommodate the mahogany and bronze spoked wheel, engine controls and other instruments. 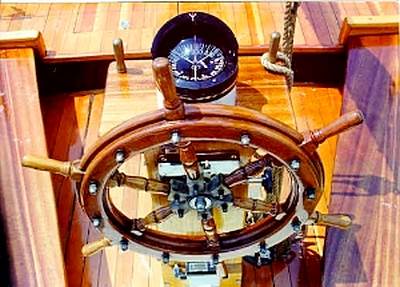 The cabin top's fiberglass covering was removed and the roof recovered with canvas and sealed with epoxy glue.

Twelve ft. grab rails I built of mahogany were added along the cabin roof port and starboard. 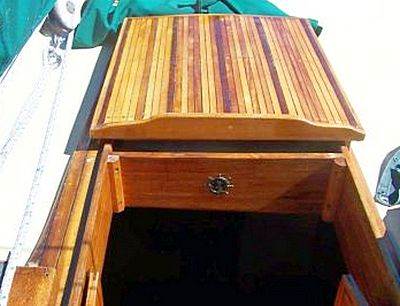 All sides of the cabin trunk were replaced with mahogany planking and the hatch and companionway covers rebuilt using alternating strips of mahogany, cherry, and hedgerow glued together.

While I loved her lines she was a devil to keep up.

She didn't have any brightwork when I bought her. I added it all - a real labor of love. 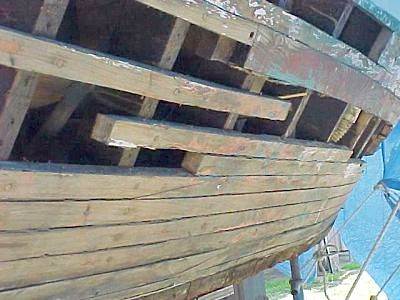 From 2000 to 2002, I replaced the hull planking from the gunwale to the first chine with sassafras, a wonderful wood, easy to work with and a good boat wood unlike sycamore, that squirrely stuff and very susceptible to dry rot. 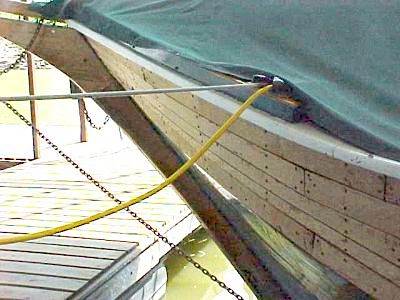 I also stripped the rest of the hull to bare wood (including having the bottom paint sand blasted off with corn cobs).

I re-caulked the entire hull including gluing shims of oak into the wider seams with the caulk.

Then I sealed all the wood with penetrating epoxy.

Any wood I replaced was treated with the epoxy.

The treatment stopped wood from expanding and contracting almost completely.

I had to sand it off below the water line because the wood wouldn't swell enough to stop leaking!

Also, paints used on the hull lasted much longer.

That's the story of the topside and hull.

A great deal of design work and construction also occurred below. 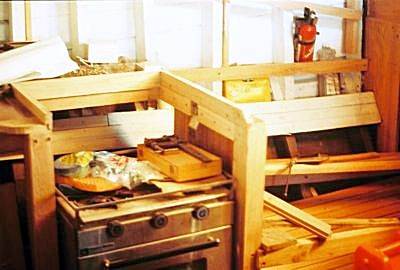 The cabin was spartan with a main area and a small cabin forward.

This would not do since I was planning on traveling some and maybe living onboard occasionally.

As it happened, I lived onboard from fall of 1984 to spring 1991 until I married my wife Marsha - chief varnisher - at least for while (I proposed to her after having a dinner of tuna casserole that she cooked onboard using a toaster oven. Her response “this is all it took? A tuna casserole?”).

Most all the interior work was done during this period of time.

Cherry was used for walls and bulkheads originally. 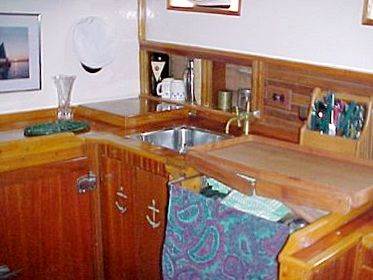 I reused it for the 6ft. galley counter top which was on the starboard side. 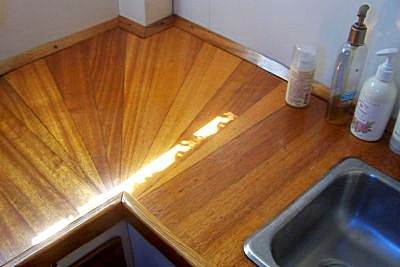 Cabinet doors and the ice box were from a 32 ft. Chris Craft cruiser that was on the burn pile at Seaway.

Marsha, my sawzall and I salvaged the cabin stuff as well as its mahogany decks.

They were used for new cockpit seats.

Much of the woodwork below was in mahogany and cedar. 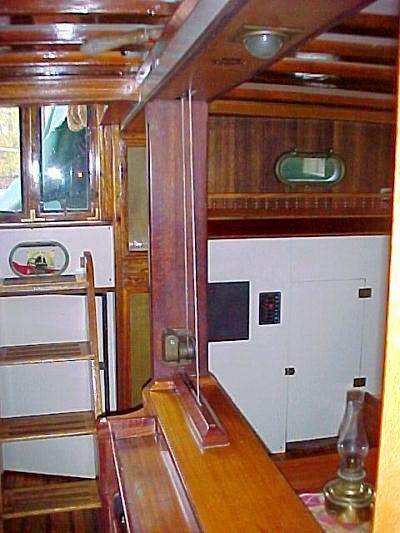 The 5 ft. long center board trunk provided a great spot for a center shelf of mahogany.

While building the shelves along the trunk, I decided to route the bilge pump discharge out through the trunk.

No one was going to see my boat pumping bilge water!

Opposite the galley, on the other side of the trunk I built an L shaped dining settee with storage across the back and under. 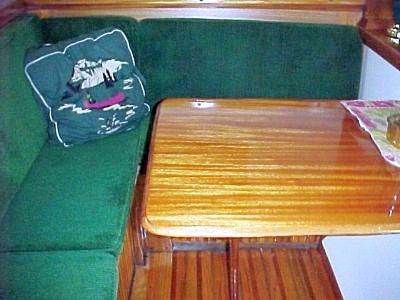 Back to Top of Page
Or scroll on to Part 3 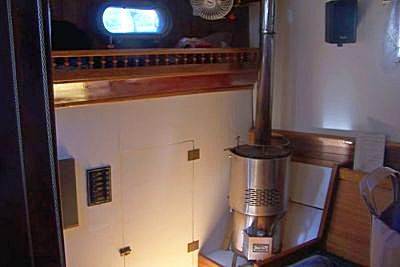 After one particularly cold winter, I installed a diesel fired cabin heater at the aft end of the "Shiloh's" settee.
Very cool. 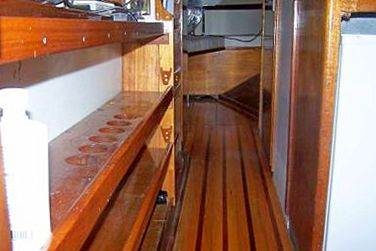 The cabin sole was made of strips of alternating oak and mahogany and treated bright.

It complimented the rest of the decor very nicely. 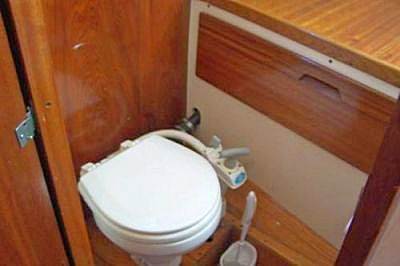 Forward of the galley I built the cabin for the head.

I installed the holding tank for the head and the head itself.

Over the tank, a mahogany counter top with a drawer for towels etc. was built.

On the port side forward of the dining area was a 2 berth cabin with hanging locker, storage under. 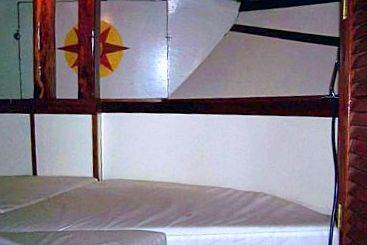 Full forward was the master's bunk built as a double with storage all around, a hanging locker and a full custom 4 in. thick mattress.

All the cabins had full mahogany trim and doors salvaged from one place or another.

They were all lined with door skins painted gloss white.

It took 5 years to get the cabin “livable”.

Another 5 to finish it. 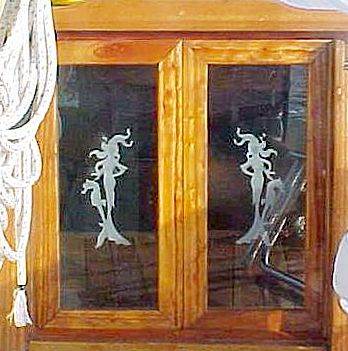 One note about the companionway doors.

I made two door frames of the prettiest mahogany I had.

Then had glass panels made with mermaids etched into them and fit them to the door frames. 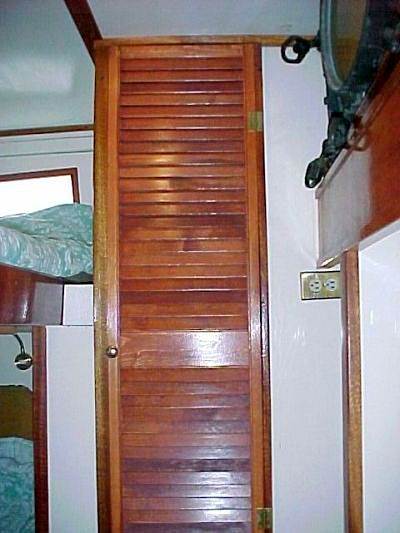 One last area needs mentioning; the running gear and the standing rigging.

When I bought Shiloh, her standing rigging consisted of deadeyes lashed with hemp to stays at one end and the chain plates at the other.

Booms were in bad shape and needed replacing.

I refinished them and used them for both the gaff and main booms.

The masts were Sitka spruce and refinished very nicely.

The worn out sails were replaced with new (I blew out the main while racing another boat on Upper Peoria Lake, Shiloh held her own up to that point).

All lines, halyards, sheets were replaced.

We also added new sail covers and an awning on a with stainless steel frame.

I have left out a lot of detail but I think you get the idea. 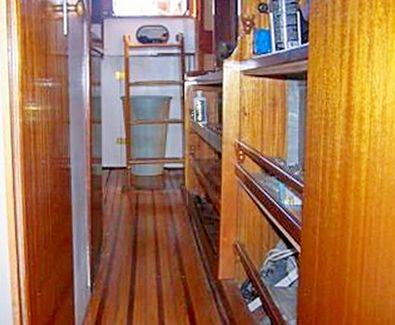 I was devoted to this boat because she was what I dreamed she could be.

She represents a great deal of work and thanks to my friends, I was able to accomplish my goal of completing the dream I'm sure Porte Wheeler had.

Through this lengthy process of restoration and construction, I experienced moments of frustration, humility, pride and delight.

If you're wondering where all the materials came from, I was very fortunate to have a friend who worked for a lumber company and mill shop that was going out of business. 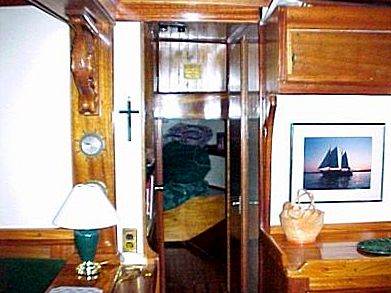 I bought the vertical grained fir and loads of mahogany for pennies on the dollar.

Another friend who is an electrician installed the AC electrical system.

I was also very lucky to have friends who knew diesel engines and others who were pretty good woodworkers and those who just wanted to help.

After moving to Tennessee, my wife and I sailed (usually motored) to various anchorages along the Tennessee and Cumberland Rivers with our dogs. 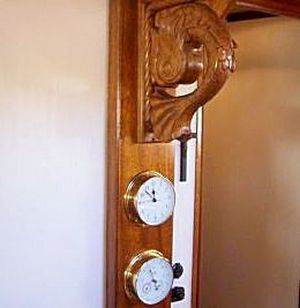 Before that we took numerous eventful trips on the Illinois River and two trips up the Mississippi to Lake City, Mn.

We had plans to go to the Gulf at some point but that was not to be.

We have a lot of great memories of building Shiloh and enjoying our time with her.

Because of health problems, we had to sell her in 2008.

We've lost track of Shiloh and would really like to know where she is.

If you have seen our Shiloh, please let us know.