Drying out in Eastern Washington State. High and dry in Endicott. The "decolam" laminate decking wore out and water penetrated the plywood.

The fasteners for cleats, etc rusted and caused the wood rot in places.

The cabin is in good condition.

I plan to let the wood dry enough to work (the wet Seattle climate is murder on wood) before I:

Having now Dried Out here is the rest of the story. 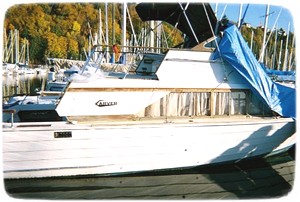 I'll begin with a pic of how she looked the first time I saw her at a marina in Seattle, WA.

I learned later that Carver's are well known for no engine hatch seals or scuppers or drip rails above the windows.

All that Seattle rain was in the bilge 8-10 inches deep.

I arranged for a trailer to haul her home but he never showed so here I am at midnight at the boat ramp trying to sleep in her when I feel something bump the hull and I hear water running.

I get up to investigate and water in the engine compartment is rising fast!

I'm bailing and waiting for him when the Police show up.

Not long after that the Fire Department and Sheriff show up lights flashing, sirens wailing and the Coast Guard calls me, tells me about my obligations and liability for any environmental hazards and reminds me that possession is 9/10 the law (so that's how that works), I'm stuck with her.

It was quite a show!

It was an extreme low tide that night (13ft) and the bow hit bottom.

All the water in the bow rushed aft.

I thought she was sinking!

The next morning a different guy with a trailer comes and we haul her home 380 miles for $1200.

It took five of us six hours to get her off the trailer and set in my uncle’s yard.

Luckily someone had some plastic barrels.

Man, was that guy pissed!

Later I built a cradle.

I looked her over good and only found two rotted places where the original Nautolex vinyl decking had worn and water got under it.

The previous owner pulled up what was left and started to paint without using primer and the wood was wet.

The wire harness was burned and haphazardly repaired by a previous owner and I guess he never heard of a common ground.


Angry, I walked away from it and went to work on stripping old paint, scraping, sanding, etc and prepping for new primer and paint.

I replaced the two rotted sections.

With a little help from my best little-helper (daughter Katie, she loves the boat too) I spent the summer prepping it and managed to get two coats of primer and one coat of epoxy paint I found at Habitat for Humanity for $6.25/gal on her before winter.

I am surprised at the lack of structural support for the inside of the transom and gunwales, that's why it is sagging.

Now, I'm not the type to run out and pay top dollar for the newest, best distributor I can find.

It took time scrounging on eBay to find a replacement and then more time to find the right gear for a counter-rotation engine.

In the meantime I struggled to remove the distributor (did I mention I am disabled and retired).

There was no way to tell that the engine was a 351W and not a 302 until the distributor finally came out (different distributor shaft size) so back to scrounging on eBay.

I repaired the wiring harness.

I repaired the plumbing for the head and engine (common mistake having hoses way too long).

I have read everything I can find about wood boats and found manuals online for my boat, engine, transmission, v-drive, battery charger, electronics, etc.

Five months later and with a good distributor and the right gear (a previous owner must have beat that in there with a hammer) and I admit I did spend some extra for the MSD Ignition box for a marine engine, the engine fired right up and sounds great!

Now back to those structural repairs...